A new survey from the Central Statistics Office shows that 96% of respondents are concerned about the current cost of living, with 56% being very concerned.

The CSO's "Our Lives Our Money" Pulse Survey also shows that 63% of respondents believe they are in a worse financial situation now than they were a year ago.

64% of people who took part in the survey believe their situation will get worse in the next 12 months.

It also reveals that 80% of people said they have experienced a decrease in disposable income in the last 12 months.

Meanwhile, more than 35% of people said they are just getting by financially while 19% said they are short of money every month to cover their expenses.

When asked if they had cut back on any essential cost in the last 12 months, the CSO said that 62% of people had reduced spending on electricity and heating, while 51% said they were not buying as much fuel.

Around 54% of households with children reported making cutbacks on food, the CSO said.

53% of all respondents also said they had reduced their trips to the cinema, theatre, or concerts while 58% had cut their expenditure on clothes, hairdressing and beauty.

41% of consumers surveyed also said they had reduced their spend on media subscriptions including the likes of Spotify, Netflix and newspapers, with 24% said they are no longer spending as much on club subscriptions such as gyms and social clubs.

It said that 97% of respondents had seen an increase in their weekly food shop, with a median or mid-point increase of €30 being reported by people.

The median increase for respondents with children in their household was €40 for their weekly food shop. 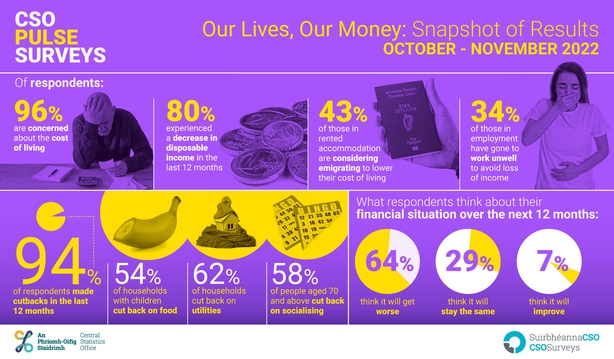 Aoife O'Neill, Statistician in the CSO's Social Data Collection division, said that more than half, or 56%, of respondents to the "Our Lives Our Money" CSO Pulse Survey said they are very concerned with the current cost of living.

"When asked what they are most worried about, 76% said utility costs are of greatest concern. Other areas of concern respondents highlighted from a maximum choice of three include healthcare (30%), no savings or pension (31%), credit card loan (19%), and mortgage/rent (24%)," Ms O'Neill said.