New figures from the Central Statistics Office show that average weekly earnings were €864.32 in third quarter of this year, up 3.2% on the same period last year. 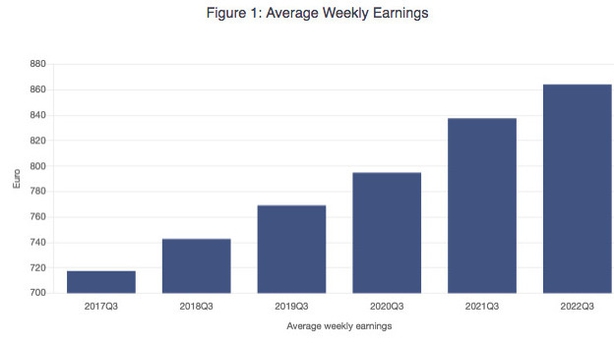 Louise Egan, Statistician in the Earnings Analysis Division said a significant factor in this increase was the ending of the Employment Wage Subsidy Scheme (EWSS) on 31 May 2022.

"Refunded payments to enterprises, including EWSS, were recorded as subsidies and refunds received, being amounts received by enterprises intended to refund part or all of the cost of wages and salaries and were deducted from other labour costs," she explained.

Today's data shows that the sector with the highest average hourly total labour costs was the information and communication sector with a rate of €49.51, followed by the education sector at €43.24.

The sectors with the lowest cost of employing labour were the accommodation and food services activities with average hourly total labour costs of €16.90 and arts, entertainment, recreation and other service activities with €22.58.