The Governor of the Central Bank has said the European Central Bank will increase interest rates at its meeting next month but he had "an open mind" on what scale that should be.

Gabriel Makhlouf was speaking at the publication of the Central Bank's Financial Stability Report today.

The Financial Stability Report is published twice a year and assesses how well prepared the financial system and borrowers are to withstand changing economic conditions.

Overall, the report finds that households are less indebted than they were a decade ago, while banks have adequate resources to cope with an expected slowdown in the economy and more interest rate rises.

Governor Gabriel Makhlouf, who is also a member of the Governing Council of the ECB, said rates will go up at the next ECB meeting in December but he expects the pace of rate rises to slow down next year.

The Governor also said one of the top risks facing the financial system is the growing size of investment funds. Ireland is the third largest location for such funds in the world.

Property funds in Ireland will now have a 60% limit set for the amount of borrowed money a fund holds.

A rule that investors must wait 12 months to cash in their investment will also be introduced, the Central Bank said.

In its Financial Stability Review today, the Central Bank also said it is increasing the level of reserves banks must keep as part of a process announced in June.

The so-called Countercyclical Capital Buffer will be increased from 0.5% to 1%. 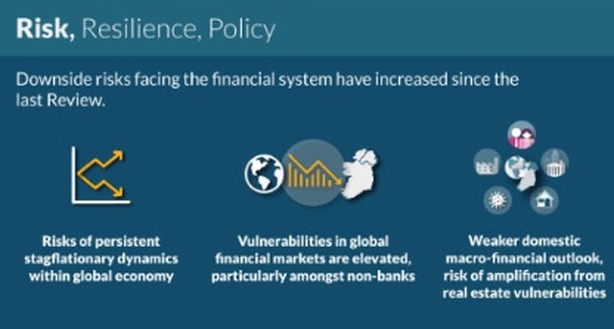 "As we and other central banks take the necessary steps to bring inflation back to target, there are undoubtedly risks of further asset price falls and, more significantly, potential episodes of disruption in segments of global financial markets," Central Bank Governor Gabriel Makhlouf said.

"The vulnerabilities accumulated during the period of low interest rates, along with the increasing interconnectedness of the modern financial system, means the full impact of shocks in this period of high volatility is hard to foresee with certainty," Mr Makhlouf added.

He is also a member of the European Central Bank's governing council.

Speaking to RTÉ's News at One, Central Bank Governor Gabriel Makhlouf said that inflation is running "way above" its target of 2% over the medium term.

He said that the people most affected by inflation are those who are vulnerable in society.

"If we don't get on top of it, the adjustment we will have to make later would be even worse, that's why the ECB is very focussed on taking the action that we're planning to take," he said.

The Central Bank Governor also said that he is waiting to see the ECB's own projections and assessment.

"Certainly, we are moving into a world that looks very different to where we thought we were going to be 12 months ago," he stated.

He said that this is partly due to the war in Ukraine and on-going supply-demand imbalances arising from the Covid-19 pandemic.