The Credit Union Consumer Sentiment index climbed to 46.1 in October from 42.1 in September, recovering part of a 11.3-point decline from August.

The index was previously sponsored by KBC Bank Ireland, who is in the process of leaving the Irish market.

Despite the improvement, only 10 of the previous 320 readings in the near 27-year history of the survey were weaker than October's reading. The index had a reading of 81.9 in January.

A slight easing in Irish inflation when many consumers were braced for ever-accelerating price pressures could also have contributed to the improvement, he added.

In September, the Government announced a budget package of €6.9 billion of permanent spending increases and tax cuts, along with €4.1 billion in one-off measures to help consumers with an inflation shock.

"While Irish consumers may be gloomy, the small improvement in confidence in October hints that they still have the capacity to see some silver lining in a generally dark economic sky," Austin Hughes said.

"In a survey period that saw notable downgrades to a range of economic forecasts at home and abroad, and repeated signals from the European Central Bank that further large interest rate increases are planned for coming months, our judgement is that this pick-up primarily reflects a response to Budget 2023 support measures," he said.

The economist said today that the impact of recent developments in the UK on consumer sentiment is not completely clearcut.

"To the extent that British economic policy problems weaken the UK economy, this would weigh on the Irish economic outlook but there is not the same mechanically damaging spill-over that caused Irish consumer sentiment to slump during the Brexit process," he explained.

"On the other hand, it could be argued that high profile UK policy difficulties may encourage Irish consumers to draw some comfort from a notably more stable, sustainable, and supportive domestic economic policy stance in this country," he added.

Austin Hughes also said that despite a slight improvement in spending plans, the buying climate among consumers remains "overwhelmingly negative".

"This suggests household spending will continue to be constrained in the run-up to Christmas, but the October survey also hints at some element of resilience that should support confidence and consumer spending in coming months," he added. 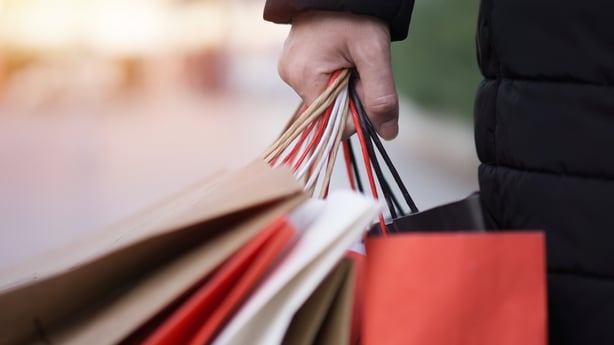 The Credit Union Consumer Sentiment Index for October contained a special question focussed on the extent of spending cutbacks being undertaken by Irish households.

The responses suggest that cutting back is now a key feature of consumer behaviour and this is set to continue in the year ahead.

Today's survey shows that the most commonly cited cutback related to "socialising" - a flexible area of spending.

As many as one in two people are pulling back, which the Credit Union said will not help the mood of consumers and it will put further strains on the viability of many cafes, bars, restaurants and other domestic-focused parts of the hospitality sector.

"Wealthier and Dublin-based consumers tended to show less widespread cutbacks in this area than other groupings," today's survey noted.

It also reported that two in five consumers said they were cutting back on holiday spend, which means that problems for many businesses in this sector of the economy look set to remain intense next year.

In terms of the Christmas retail outlook, one in three consumers said they would cut back on gift-buying, with responses suggesting the retrenchment is likely to intensify rather than ease as we move forward. However, just one in eight consumers at cutting back on on child-related spending.

Meanwhile, one in three people are postponing "big ticket" purchases such as cars, furniture, or electrical appliances while broadly similar numbers are cutting back on spending on repairs and maintenance.

"This implies some increased risk of equipment failure that could result in increased financial pressures to replace problem goods as well as some element of safety risks," the report cautioned.

"The widespread nature of these cutbacks suggests consumers are experiencing a sea-change in their economic and financial circumstances at present," economist Austin Hughes said.

" In turn, this explains the historically low Credit Union consumer sentiment readings at present. It also emphasises the extent to which Irish consumer spending may be constrained through the coming year," he added.