New Central Statistics Office figures show that the annual rate of inflation rose by 8.2% in September, down from an annual increase of 8.7% in August.

The annual rate of inflation overall moderated last month but the latest batch of inflation figures from the CSO present a mixed bag of what is happening in the economy.

Both electricity and gas prices held steady in September, but most utility providers announced significant price increases which kicked in at the start of October.

Prices for electricity and gas are still up almost 50% on an annual basis.

Petrol and diesel both fell slightly last month reflecting volatility on world markets but home heating oil went up almost 8% over the month.

The price of some services like motor insurance fell but home insurance went up.

Core inflation, which strips out food and energy prices, is increasing at an annual rate of 5.5%. That is over twice the ECB's 2% target rate. 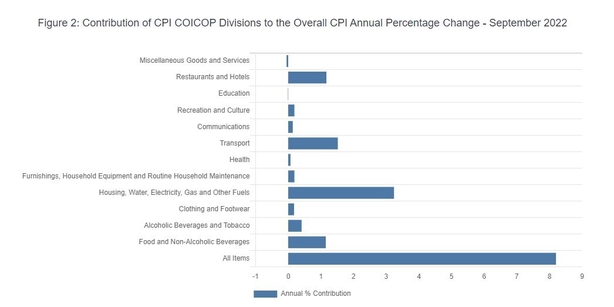 The CSO noted that consumer prices have been rising on an annual basis since April 2021, with annual inflation of 5% or more recorded in each month since October 2021.

Today's figures show that electricity prices on an annual basis were up 36.2% in September, while gas prices rose by 53.1%, home heating oil jumped by 83.8% and solid fuels were up 32.5% in the year.

Meanwhile the cost of diesel increased by 32.5%, while petrol prices rose by 15.1%. The price of cars was also 11.2% higher while air fares rose by 18.8% compared with September last year, the CSO said.

With further gas and electricity price increases set to kick in this month, the Department of Finance said it expects inflation to peak at 10.4% in the final quarter of this year and then ease gradually to average 7.1% for next year.