New figures from the Central Bank show the average interest rate on new Irish mortgages rose to 2.64% in August 2.63% in July.

The equivalent euro area average rate rose by 13 basis points to 2.21% in August - its highest level since at least August 2017 and almost double the rate this time last year.

Ireland now has the eighth highest mortgage rates in the euro zone, behind countries such as Germany and the Netherlands.

But households in these countries tend to take out much longer-term fixed rates compared to Irish households - of up to 20 years or more - which usually have higher rates.

France had the lowest average mortgage rate in the euro zone at 1.59%, followed by Luxembourg at 2%. Latvia and Greece had the highest rates.

Commenting on today's figures, Daragh Cassidy, Head of Communications at bonkers.ie, said that while mortgage interest rates have begun to jump elsewhere in Europe, they have remained "remarkably steady" here for now.

But he added that, unfortunately for homeowners, the ECB has signalled that it will continue to raise rates over the coming months.

Most of this increase will eventually be passed on to mortgage customers. How much will somewhat depend on the competitive pressures the banks feel under," he added.

He noted that the main lenders - AIB, Bank of Ireland and Permanent TSB - have yet to pass on any of the previous 1.25% ECB rate increase to their non-tracker customers. 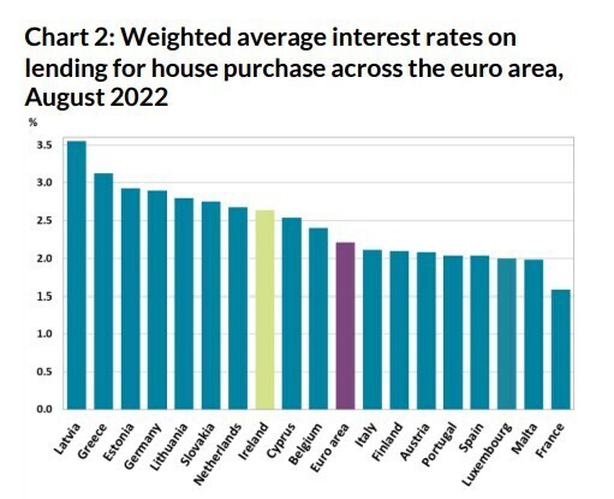 But he added that the smaller, non-bank lenders such as Avant Money, ICS Mortgages and Finance Ireland have raised their rates by over 2% in some cases in recent months.

"Increasing rates will help take the froth out of the housing market but it won't necessarily help first-time buyers as their repayments will increase. What's more, all banks stress test mortgage applicants to see if they can cope with a future rise in interest rates. Some first-time buyers are now finding that they're failing this stress test as rates go up," he stated.

Today's Central Bank figures show that the average rate for a fixed-rate mortgage was 2.49% while it was 3.77% for a variable rate in August.

The total volume of new mortgage deals came to €937m in August, an increase of 33% on the same time last year.

Meanwhile, the average interest rate on new consumer loans was 7.36% in August.

The Central Bank said the volume of new consumer lending (including renegotiations) reached €194m in August - up 24% on August last year and down by 5% on July of this year.