The International Monetary Fund has today cut its global growth forecast for 2023 amid colliding pressures from the war in Ukraine, high energy and food prices, inflation and sharply higher interest rates.

The IMF also warned that conditions could worsen significantly next year.

It forecasts the Irish economy will grow by 9% in GDP terms this year before slowing to growth of 4% in 2023. This compares to the Department of Finance's forecasts of 10% GDP growth this year and 4.7% next year, released on Budget day.

The IMF’s forecasts are contained in its World Economic Outlook published today.
The Fund said its latest forecasts show that a third of the world economy will likely contract by next year, marking a sobering start to the first in-person IMF and World Bank annual meetings in three years.

"The three largest economies, the US, China and the euro area will continue to stall," IMF chief economist Pierre-Olivier Gourinchas said in a statement.

"In short, the worst is yet to come, and for many people, 2023 will feel like a recession," he said.

The IMF said global GDP growth next year will slow to 2.7%, compared to a 2.9% forecast in July, as higher interest rates slow the US economy, Europe struggles with spiking gas prices and China contends with continued Covid-19 lockdowns and a weakening property sector.

The Fund is keeping its 2022 growth forecast at 3.2%, reflecting stronger-than-expected output in Europe but a weaker performance in the US, after 6% global growth in 2021.

US growth this year will be a meager 1.6% - a 0.7 percentage point downgrade from July, reflecting an unexpected second-quarter GDP contraction. The IMF kept its 2023 US growth forecast unchanged at 1%. 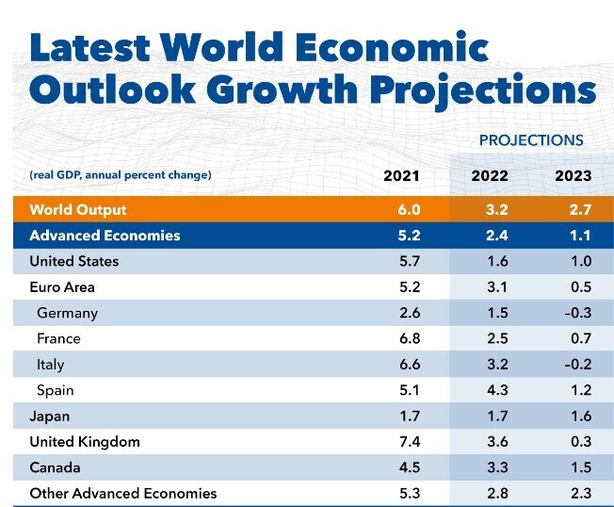 The IMF said its outlook was subject to a delicate balancing act by central banks to fight inflation without over-tightening, which could push the global economy into an "unnecessarily severe recession" and cause disruptions to financial markets and pain for developing countries.

But it pointed squarely at controlling inflation as the bigger priority.

"The hard-won credibility of central banks could be undermined if they misjudge yet again the stubborn persistence of inflation," Gourinchas said. "This would prove much more detrimental to future macroeconomic stability."

The Fund forecast headline consumer price inflation peaking at 9.5% in the third quarter of 2022, declining to 4.7% by the fourth quarter of 2023.

A "plausible combination of shocks" including a 30% spike in oil prices from current levels could darken the outlook considerably, the IMF said, pushing global growth down to 1% next year - a level associated with widely falling real incomes.

Other components of this "downside scenario" include a steep drop-off in Chinese property sector investment, a sharp tightening of financial conditions brought on by emerging market currency depreciations and labor markets remaining overheated resulting in lower potential output.

The IMF put a 25% probability of global growth falling below 2% next year - a phenomenon that has occurred only five times since 1970 - and said there was a more than 10% chance of a global GDP contraction.

These shocks could keep inflation elevated for longer, which in turn could keep upward pressure on the US dollar, now at its strongest since the early 2000s.

The IMF said this is pressuring emerging markets, and further dollar strength could increase the likelihood of debt distress for some countries.

Emerging market debt relief is expected to be a major topic of discussion among the world's global financial policymakers at the Washington meetings, and Gourinchas said now was the time for emerging markets to "batten down the hatches" to prepare for more difficult conditions.