The Comptroller and Auditor General has estimated that the cost to the State of measures taken to stabilise the banking system after the financial crisis in 2008 was €45.7 billion, a bigger figure than it had earlier anticipated.

In previous reports, the C&AG had estimated the costs in the range of €40 billion to €42 billion.

Arriving at the figure of €45.7 billion, the C&AG said this was after taking account of the value of the State's remaining shareholdings in AIB, Bank of Ireland and Permanent TSB - a combined €4.9 billion - as well as NAMA's earnings at the end of of last year of €1.8 billion

Today's report states that the most significant net costs to the State at the end of 2021 were in respect of IBRC, which had a net estimated cost of €37.3 billion, and AIB, which had an estimated net cost of €13.1 billion.

The State had introduced several measures to stabilise the banking system after the financial crisis in 2008.

These included substantial recapitalisation of the domestic banks, the provision by the Central Bank of exceptional liquidity assistance to the banks here and Government guarantees of deposits and certain other liabilities.

In today's report on the Accounts of the Public Services for 2021, the C&AG said the result in respect of the State's level of support for each bank has also been estimated, taking account of the estimated residual value of its investments by the end of last year. 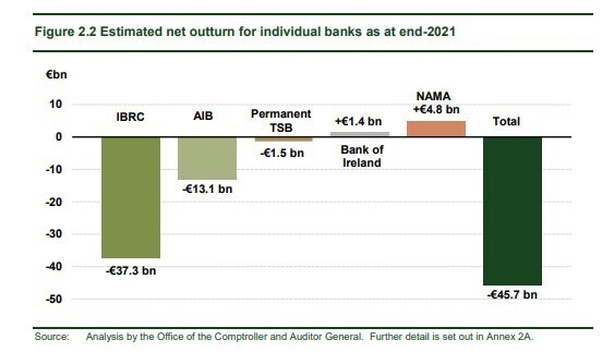 Earlier this month, the State completed the sell-off of its shareholding in Bank of Ireland. A total of €841m was generated through the trading plan process, which has been ongoing for a number of months.

A total of €6.7 billion has now been recovered by the State from its €4.7 billion bailout of Bank of Ireland.