Spain drew up plans that could force energy-intensive industries to shut at peak demand times.

France said it was preparing to send gas to Germany from October, while Berlin said Europe's powerhouse was still in talks on state aid for ailing utility Uniper.

German buyers briefly reserved capacity today to receive Russian gas via the Nord Stream 1 pipeline, once one of Europe's major gas supply routes, for the first time since the line was shut three weeks ago. But they soon dropped the requests.

It was not immediately clear why buyers had submitted requests for capacity when Russia has given no indication since it shut the line that it would restart any time soon.

Russia, which had supplied about 40% of the European Union's gas before its February invasion of Ukraine, has said it closed the pipeline because Western sanctions hindered operations.

European politicians say that is a pretext and accuse Moscow of using energy as a weapon.

European gas prices have more than doubled from the start of the year amid a decline in Russian supplies.

Russian gas flows to Europe via Ukraine, although much reduced, have nevertheless continued.

But the sharp drop in Russian fuel exports, in retaliation for Western sanctions over Moscow's invasion of Ukraine, has left governments scrambling to find energy resources, but also to warn that power cuts could happen, amid fears of recession.

The German economy is contracting already and will likely get worse over the winter months as gas consumption is cut or rationed, the country's central bank said today.

It added that the economy was likely to shrink, even if outright rationing is avoided, as companies cut or halt production.

In France, exports of natural gas to Germany could start around October 10, the head of France's CRE energy regulator said, following an announcement by President Emmanuel Macron that the two EU neighbours would help each other with electricity and gas flows amid the crisis. 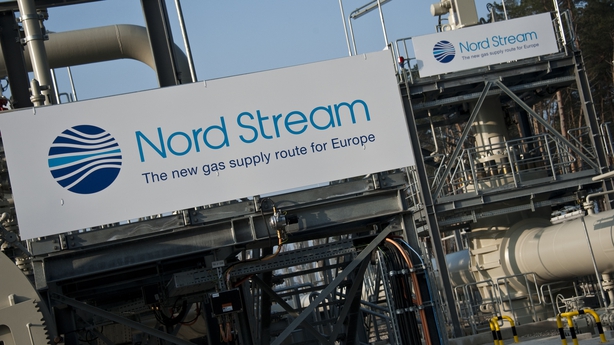 "Gas was (until now) only flowing from Germany to France, so we did not have the technical tools to reverse the flows and we did not even have a method to regulate prices," CRE chief Emmanuelle Wargon told franceinfo radio.

While French energy group EDF is racing to repair corrosion-hit nuclear reactors, "exceptional" measures this winter could include localised electricity cuts if the winter is cold and EDF's plans are delayed, Wargon said.

"But there will be no gas cuts for households. Never," she said.

Spanish Industry Minister Reyes Maroto said that obliging energy-intensive companies to close down during consumption peaks is an option on the table this winter if required.

The companies would be compensated financially, she said in an interview with Spanish news agency Europa Press, adding there is no need to impose such closures now.

And Finns were warned they should be prepared for power outages.

"As a result of great uncertainties, Finns should be prepared for power outages caused by a possible power shortage in the coming winter," national grid operator Fingrid said.

Reflecting the disruptions caused across the continent, Finnish power retailer Karhu Voima Oy said it had filed for bankruptcy due to a sharp rise in electricity price rises.

Europe's imports of thermal coal in 2022 could be the highest in at least four years and may rise further next year, analysts said today, highlighting the extent of the energy crisis following sanctions on top supplier Russia.

European imports of thermal coal this year could rise to about 100 million tonnes, the most since 2017, according to Noble Resources International, while commodities pricing agency Argus expects shipments to reach a four-year high.

"Europe is going back in time," Rodrigo Echeverri, head of research at Noble, told a conference.

Meanwhile oil prices fell by more than 1% today, pressured by expectations of weaker global demand and by US dollar strength ahead of a potentially large interest rate hike, though supply worries limited the decline.

Oil has also come under pressure from forecasts of weaker demand, such as last week's forecast from the International Energy Agency that the fourth quarter will see zero demand growth.