The value of goods exported from Ireland reached €14.8 billion in July, up €1.6 billion compared to the same time last year, new figures from the Central Statistics Office show.

The value of goods imported hit €10.5 billion in July, up €2.7 billion on the same month last year.

"Comparing the first seven months of 2022 with the same period in 2021, exports of goods increased by 28%, and the value of imports increased by 35%," said Ciarán Counihan, Statistician in the International Trade in Goods Division at the CSO. 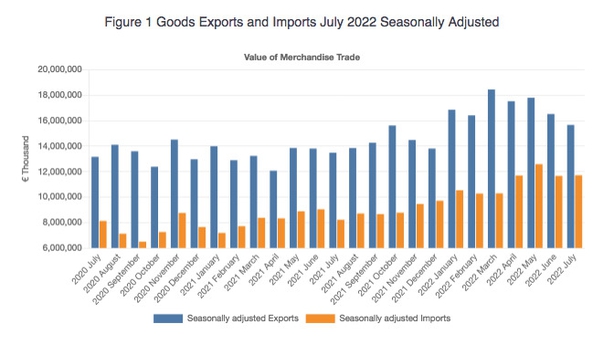 Meanwhile, the CSO figures show that imports from Great Britain grew by 58% to nearly €1.9 billion in July compared with the same time last year.

The largest increases were in the imports of Mineral Fuels and Chemicals and Related Products.

Exports to Great Britain fell by 23% to below €1.2 billion in July 2022, due to a decrease in the exports of Chemicals and Related Products.

The EU accounted for 42% of total goods exports in July, while the USA was the main non-EU destination accounting for €25% of total exports.

The EU accounted for 30% of total goods imports in July, which is an increase of 11% compared with July of last year.