Annual inflation slowed for the first time in seven months in August, with prices up 8.7% compared to a 38-year high of 9.1% in the previous two months, new figures from the Central Statistics Office show.

Prices were 0.2% higher on a monthly basis, which was also the slowest level of growth since January.

The highest monthly rises were seen in health, with prices up 1.3% while and clothing and footwear was also 1.1% more expensive.

But gas and other fuel inflation eased to 1% in the month.

Energy companies have announced that they will impliment gas and electricity price increases of between 27% and 47% in the coming weeks, suggesting inflation may not yet have peaked.

The CSO noted today that prices have been rising on an annual basis since April 2021, with annual inflation of 5% or more recorded in each month since October.

The CSO noted that electricity costs were up by 38.1% on an annual basis in August, while the price of gas rose by 56.1% and home heating oil jumped by 72.9%.

Solid fuels also saw a price increase of 31.9% in the year to August. 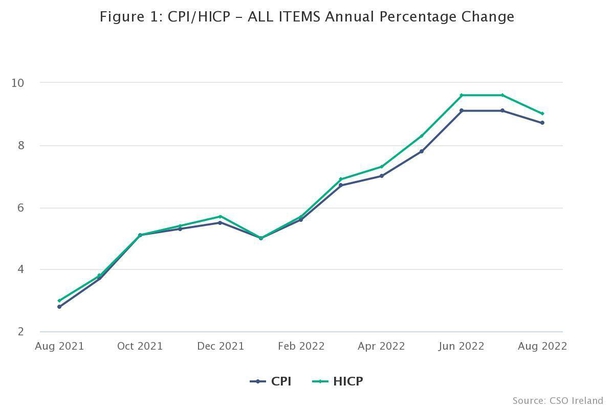 But prices for motor and health insurance premiums fell in August as did education costs, the CSO added.