China's factory activity extended declines in August as new Covid infections, the worst heatwaves in decades and an embattled property sector weighed on production, suggesting the economy will struggle to sustain momentum.

The official manufacturing purchasing managers' index (PMI) rose to 49.4 in August from 49 in July, the National Bureau of Statistics (NBS) said today.

While the PMI slightly beat expectations for 49.2 in a Reuters poll of analysts, it remained below the 50-point mark that separates contraction from growth for the second month in a row.

This suggests protracted weakness in the sector.

The survey shows the world's second-largest economy is struggling to emerge from the sluggish growth seen in the June quarter, with risks darkening the outlook as high inflation and the Ukraine war hit external demand.

"The official PMIs show a further loss in economic momentum this month as the reopening boost waned and the property downturn deepened," Julian Evans-Pritchard, a China economist at Capital Economics, said in a note.

"We continue to think the economy will struggle to make much headway during the coming months," he added.

He also expects activity will be disrupted due to tighter virus controls ahead of the Communist Party Congress in October.

The sub-index for output remained unchanged but is still in contraction territory as production is disrupted by a power crunch, while the new orders sub-index grew by 0.7 point.

In particular, small manufacturers, which are less equipped to mitigate Covid disruptions than their larger peers, suffered greater pressure in August with their PMI down 0.3 point.

The return of tighter Covid restrictions in August as new cases were reported suggests Beijing has no immediate plans to loosen its broad zero-Covid policy, analysts say. 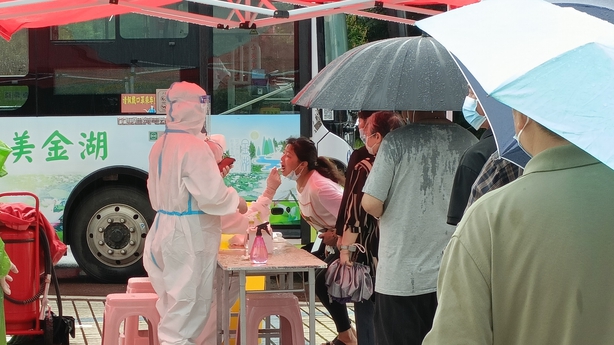 According to Evans-Pritchard, 41 cities, accounting for 32% of China's GDP, are currently in the midst of outbreaks, the highest since April when extensive lockdowns hurt the economy badly.

The extreme heat and drought also caused some regions such as the southwestern province of Sichuan and neighbouring Chongqing to suspend industrial production to ensure residential power supply, disrupting operations of well-known manufacturers like Taiwan's Foxconn and battery giant CATL.

Some construction work was also suspended due to the heat, dragging down the official non-manufacturing PMI in August to 52.6 from 53.8 in July.

The official composite PMI, which combines manufacturing and services sectors, fell to 51.7 from 52.5 a month before.

"With heatwaves easing and government policy support helping, factory and services activity is expected to expand in the coming months," he said.

China's economy slowed sharply in the second quarter as widespread Covid lockdowns hammered demand and business activity, while the property market has lurched from crisis to crisis.

Economists also warn of weakening external demand that may hinder China's exports, which shored up growth in the first half of the year, making up for sluggish consumption.