Residential property prices returned in June to levels not seen since the credit-fuelled peak of 2007, after rising 14.1% on an annual basis, new Central Statistics Office figures show today.

The 14.1% year-on-year growth in June was down from 14.4% in May, cooling slightly for the third successive month, the CSO said.

Today's figures show that home prices in Dublin rose by 11.8% and prices outside Dublin were up by 16% in June.

This was down from a growth rate of 14.4% in the year to May and compares to an increase of 6.8% the same time last year.

The CSO said its national Residential Property Price Index (RPPI) hit a value of 163.6 points for June, which is equal to its highest level recorded at the peak of the economic boom in April 2007.

Today's CSO figures show that Dublin house prices increased by 11.9% and apartment prices were up by 11.2%.

It noted the highest house price growth in Dublin was seen in Dublin city at 13.8%, while Dún Laoghaire-Rathdown saw a rise of 10.1%.

The region outside of Dublin that saw the largest rise in house prices was the border at 20.1%, while at the other end of the scale the midwest saw a 11.9% rise.

According to the CSO, property prices nationally have increased by 123% from their trough in early 2013.

Dublin residential property prices have risen 127.6% from their February 2012 low, while home prices in the rest of Ireland are 127.2% higher than their May 2013 trough.

Today's figures show that households paid a median price of €290,000 for a home on the residential property market in the 12 months to June. 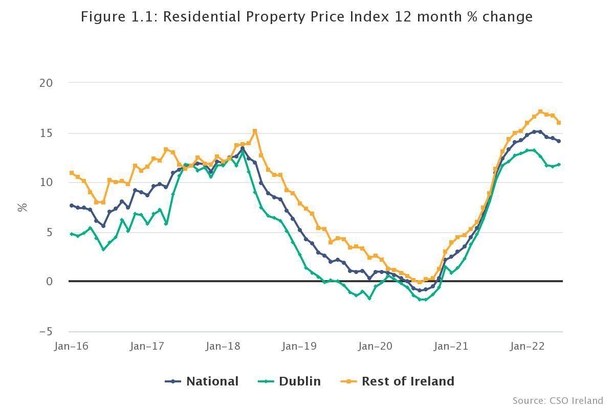 In June, a total of 4,087 home purchases were filed with Revenue.

The total value of transactions filed in June was €1.5 billion, the CSO said.

Existing homes accounted for 80.9% of the purchases filed in June, an increase of 12.2% compared with June last year.

Property prices have snapped back sharply since they started increasing a decade ago, four years after a bubble collapsed and cut values in half.

The Central Bank, which has since put in place some of the toughest curbs on mortgage lending in the euro zone, said in a November 2021 assessment that prices were around the level expected based on economic fundamentals such an income growth.

House prices have risen sharply since then and June's month-on-month growth of 1.2% was the highest since late last year.

"The macro-prudential rules are a crucial distinguishing feature," he said, pointing to the curbs that limit mortgage lending to 3.5 times a borrower's gross income.

Buyers also have to have a deposit of at least 10% compared to the 100% mortgages offered during the runaway Celtic Tiger economic boom that ended in the euro zone's costliest banking rescue.

Mortgage drawdowns, which ballooned to an unsustainable €40 billion in 2006, are growing at a far steadier rate and reached €10.5 billion last year. The country's much shrunken banking sector is also far better capitalised.

However purchasing a home remains out of reach for many. 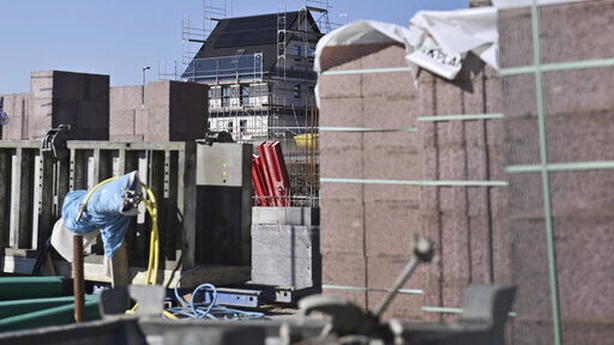 While Ireland built too many homes in the wrong places in the 2000s, supply has since constantly fallen short of demand and rents have long passed their previous peak, limiting prospective buyers' ability to save a deposit.

Listings site Daft.ie this week said it had just 716 homes available to rent for a population of 5.1 million people at the start of August.

"Just because the fundamentals support it, doesn't mean it's necessarily the healthy outcome or the outcome you'd want as a policymaker," said Ronan Lyons, an assistant economics professor at Trinity College Dublin who analyses the data for Daft.

"It is the case that for the supply we have, we've got the prices we have. It could be different if more homes had been built," he added.