The European Commission has today cut its forecasts for economic growth in the euro zone for this year and next and revised up its estimates for inflation mainly due to the impact of the war in Ukraine.

In its quarterly forecasts, Brussels confirmed its more downbeat outlook, which it had already discussed with euro zone finance ministers on Monday.

The EU executive now predicts growth of 2.6% this year for the 19-country currency bloc, slightly less than the 2.7% it had forecast in May.

But next year, when the impact of the Ukraine war and of higher energy prices may be felt even more acutely, growth is now forecast to be 1.4%, instead of the 2.3% previously estimated.

"A storm is possible, but we are not there at the moment," EU economics commissioner Paolo Gentiloni said.

He noting that the fall of the euro to parity against the dollar was a major concern largely for developing economies, rather than for the euro zone, because the euro was appreciating against other major currencies.

On Ireland, the European Commission said that despite the very strong first quarter reading, it was also cutting its predictions for Irish GDP growth for this year to 5.3% from its previous forecast of 5.4%.

It also said that Ireland's 2023 annual growth projection is revised down to 4% from 4.4% as a result of the deteriorating global outlook, weakening sentiment, and persisting inflationary pressures.

The European Commission said the outlook for the economy is surrounded by high uncertainty also due to factors which are specific to Ireland, such as recent developments regarding the disapplication by the UK of the Protocol on Ireland / Northern Ireland under the EU-UK Withdrawal Agreement. 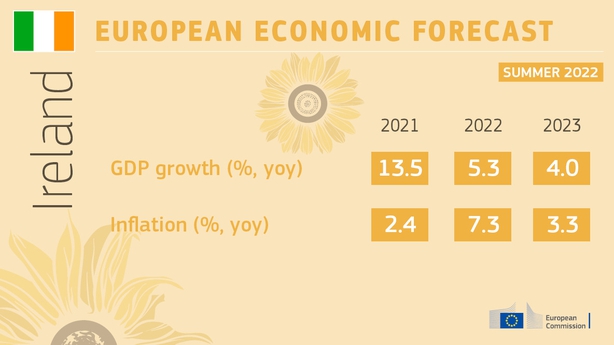 It also noted that HICP inflation is still rising and hit 9.6% in June with energy prices in May 46.2% higher than in the previous year.

"While large parts of inflation are imported, the services inflation is more connected to domestic developments. It was above 5% over the last few months," the Commission said.

"HICP inflation is now projected to rise to 7.3% in 2022 before declining to 3.3% in 2023, when energy prices are expected to contribute negatively," it added.

In a major change, the Commission also raised its estimates for euro zone inflation, which this year is now expected to peak at 7.6% before falling to 4% in 2023.

Brussels warned headline inflation could move even higher if gas prices soared due to Russia cutting off supplies, which might lead to a further downward revision of growth.

Risks to the outlook from a resurgence of the Covid-19 pandemic could also not be ruled out.

Despite these high risks, the Commission underlined that the euro zone was not expected to tip into a recession and the forecasts could also improve if recent declines of oil and commodity prices continued.

Thanks to a strong labour market with historically low unemployment rates, the Commission said private consumption could also prove more resilient to increasing prices if households were to use more of their accumulated savings.

The Commission had in May forecast expansions of respectively 1.6% and 2.4%.

France is expected to grow by 2.4% this year, instead of the previously forecast 3.1%. Next year, growth is estimated to slow further to 1.4%, against 1.8% predicted in May.

Among the three biggest economies of the bloc, Italy is the only one that is expected to grow this year by more than previously forecast. It is now seen to expand by 2.9%, rather than the 2.4% estimated in May.

However, the country is expected to experience a marked slowdown next year, when growth is predicted at 0.9%, less than other large economies and down from a previous forecast of 1.9%.