The weighted average interest rate on new mortgages in Ireland was 2.73% in May, according to the latest figures from the Central Bank.

The average fixed rate was 2.55% while the average variable rate was 3.66%. Fixed rate mortgages made up 83% of all new mortgages.

The average mortgage rate across the Euro area was 1.76%. This increased by 0.17% compared to April and is 0.49% or almost half a percentage point higher than a year ago.

Ireland has the second highest mortgage rates in the euro area, next to Greece, today's figures show. 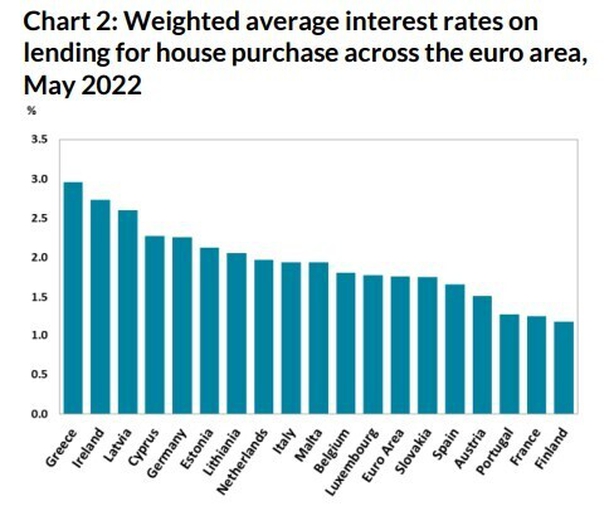 The European Central Bank will hold its next Governing Council meeting next week when it is widely expected to increase interest rates for the first time in over a decade.

"The ECB rate increase at the end of the month has been well-flagged and thankfully, has prompted mortgage holders throughout the country to move, in their thousands, to switch to, in most cases, a low-cost flexible, fixed rate," said Trevor Grant, Chairperson of the Association of Irish Mortgage Advisors.

"In the midst of all the uncertainty around inflation and a housing crisis, people are looking for security wherever they can find it – and fixed rate mortgage contracts offer this.

"One positive to emerge of late is that the switching movement in this country has taken hold like never before, which is in the best interests of the individual mortgage holder, and the market overall as it pushes providers to be more competitive in their offerings," he added.