Permanent TSB may choose to absorb the first two rounds of European Central Bank interest rate hikes and not increase its own mortgage pricing in a bid to grow its market share, the bank's chief executive said today.

The ECB outlined plans this month to end quantitative easing on July 1 then raise rates by 25 basis points on July 21.

It also plans to hike again on September 8 and go for a bigger move, unless the inflation outlook improves in the meantime.

"I think it's fair to say that Irish banks given their liquid position and given where they are can withstand for a portion of time some of those interest rate increases," Eamonn Crowley told reporters after the company's EGM today in Dublin.

"You could imagine the first couple of moves being okay, it depends on the pace and the size and the scale. No decisions have been made, no strategies have been adopted but we want to maintain our competitive position, that's the key message," he added.

Majority state-owned Permanent TSB is the third largest mortgage lender in Ireland with a 17% share of the market at the end of March.

Eamonn Crowley said the bank estimates it would make a €40m gain from a 50 basis point rate hike as it would no longer be charged for holding excess cash and its stock of mortgages that track the ECB rate would automatically reprice.

He also said the bank's pipeline of approved mortgage loans continues to increase.

He added that he expects the Irish mortgage market to keep growing through the current cost of living crunch due to the demand for loans far outstripping housing supply.

As part of the deal, about 450 Ulster Bank employees will be entitled to transfer to Permanent TSB.

Over 99% of shareholders voted in favour of resolutions to approve the transaction at the bank's Extraordinary General Meeting (EGM) in Dublin today.

The vote is one of a number of steps needed to complete the transaction and begin the transfer of the Ulster Bank loans to Permanent TSB.

The first transfers are set to begin in the fourth quarter of this year.

The transaction remains subject to competition and regulatory approval. 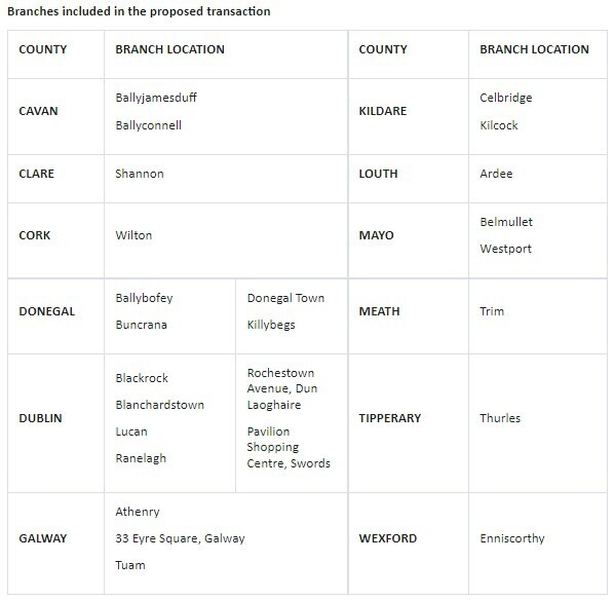 Permanent TSB said that Ulster Bank's Mortgage, SME and Asset Finance customers whose loans will transfer to PTSB do not need to do anything at this stage and should continue to engage with Ulster Bank as before.

They will be contacted in advance of their loans transferring with further information in the coming months, the lender stated.

"It paves the way for us to complement our organic growth, serving more customers, widening our range of products and services, and using our greater scale and bigger branch network to drive competition in the Irish retail banking market," Mr Crowley said.

The bank CEO said that Permanent TSB will continue to engage with regulatory and competition authorities on getting the necessary approvals from them.

"Subject to achieving these approvals, we look forward to welcoming the first Ulster Bank mortgage and SME customers to Permanent TSB in the coming months and increasing the number of Permanent TSB branches in communities throughout Ireland by over 30%," he added.

Permanent TSB said it has introduced a number of new supports for customers who wish to move their current and deposit accounts to the bank.

Staff from Permanent TSB are now present in 45 Ulster Bank branches with more to come in the coming weeks. They are there to facilitate Ulster Bank customers who want to switch their banking services to a new bank ahead of the planned departure of Ulster Bank from the Irish market.

Permanent TSB is also launching a number of mobile and pop-up branches in various parts of the country in the coming weeks and special facilities in Permanent TSB branches as part of their outreach to customers of the departing banks.