Ireland and Denmark had the highest price levels for consumer goods and services across the EU in 2021, according to Eurostat.

The EU's statistics agency published data today showing price levels here and in Denmark were 140% of the EU average. The lowest prices levels were in Romania and Bulgaria at 56% of the average.

The biggest difference between the most and least expensive countries was when it came to restaurants and hotels.

Denmark was 3.4 times more expensive than the cheapest country, Bulgaria, at 46% of average followed by Romania at 54% and Hungary at 62%.

The second biggest difference was when it came to alcohol and tobacco. Ireland was the most expensive at 205% of the average, followed by Finland at 173% of average and Sweden at 136%.

The cheapest country was Bulgaria at 64% of the average, followed by Poland at 72% and Hungary at 79%.

Eurostat said the price differential is largely explained by differences in the taxation of alcohol and tobacco.

Meanwhile, food and non-alcoholic beverages were most expensive in Luxembourg at 125% of the EU average, followed by Denmark at 120% and Ireland at 119%. 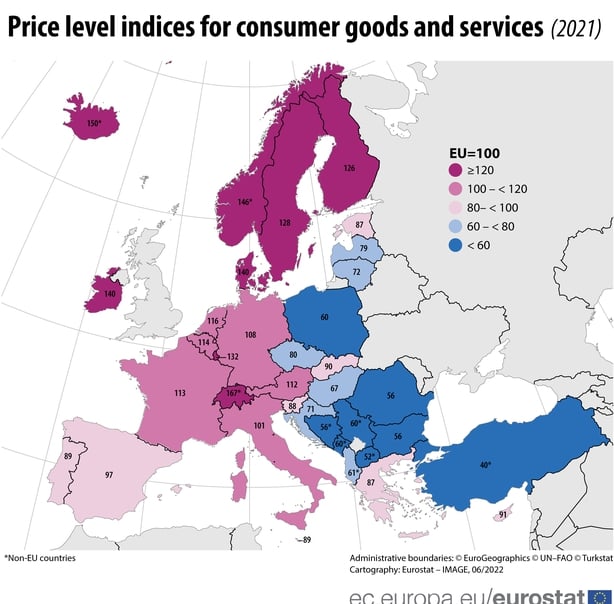 The cheapest country was Romania at 69% of the average, followed by Poland at 72% of average.