The CSO said that €17.7 billion in goods were exported in the month, an increase of 44% on the same month last year.

Meanwhile, imports were up by more than a third to €11.2 billion, the CSO figures show.

Within that, imports from Britain rebounded by 78% to almost €2.1 billion on an annual basis driven mainly by increases in the imports of mineral fuels and chemicals and related products.

The CSO noted that the large growth rate in imports from Great Britain is partly explained by the relatively low level of imports in April 2021.

Meanwhile, exports to Britain were also higher, rising by more than half to almost €1.6 billion. 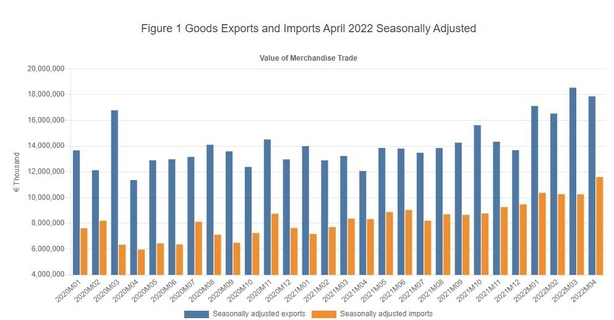 The US was the main non-EU destination accounting for 31% of total exports in April.

Today's CSO figures show that the EU accounted for 32% of total goods imports in April, an increase of 29% on the same time last year.