Residential property prices saw year-on-year growth of 14.2% in April compared to a seven-year high of 15.1% in March, the CSO figures reveal.

Home prices rose by 0.1% on a monthly basis, the lowest monthly expansion since property price inflation began to pick up again in mid-2020 following a brief dip at the start of the Covid-19 pandemic.

Today's figures show that Dublin residential property prices rose by 11.5% in the year to April, while property prices outside Dublin were 16.4% higher than a year earlier.

The region outside of Dublin that saw the largest rise in house prices was the Border at 22.1%, while at the other end of the scale, the Mid-West saw a 11.7% rise.

Today's CSO figures show that consumers paid a median price of €286,000 for a home on the residential property market in the 12 months to April.

The Dublin region had the highest median price of €410,000 in the year to April.

Within the Dublin region, Dún Laoghaire-Rathdown had the highest median price of €605,000, while South Dublin had the lowest at €375,000. 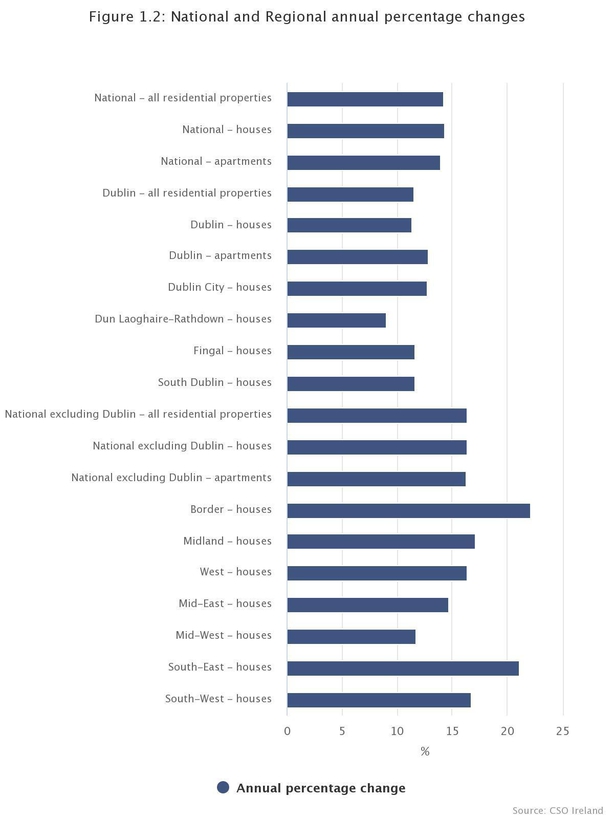 Meanwhile, the Eircode area with the highest median price for a home was A94 'Blackrock' with prices of €720,000.

Outside of Dublin the most expensive Eircode area over the last 12 months was A63 'Greystones', with a median price of €499,999.

The total value of transactions filed in April was €1.1 billion.

Existing homes accounted for 84% of the home purchases filed in April, an increase of 8.2% compared to the same time last year.