The economy grew by 10.8% in GDP terms in the first three months of this year but shrank by 1% when measured by Modified Domestic Demand (MDD), which more closely tracks the domestic economy, new Central Statistics Office figures show today.

On an annual basis, Modified Domestic Demand is up just over 11% compared to the first quarter of last year and up 11% in GDP terms.

The disproportionate effect of the multinational sector on Ireland's national accounts can create a confusing picture of what is really going on in the economy.

Based on GDP, the growth in Ireland's economy in the first three months of this year was twice as fast as the next nearest EU country.

But when measured by consumption, or what is spent, Ireland was in the lower half of EU economies.

Today's CSO figures show a big increase in industrial output, dominated by multinationals, of 15% in the first three months of the year.

There was also an increase in the export of computer services and it is these two sectors which made the biggest contribution to the increase in GDP.

But today's figures show that construction fell by 3.7% in the first quarter of 2022, while investment also fell. 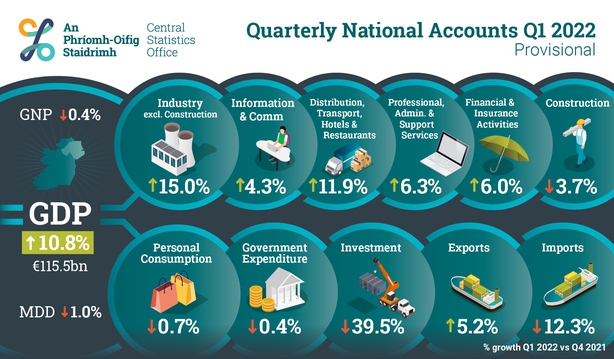 Wages grew by 2.4% in the quarter but spending by consumers fell by 0.7%, with spending on cars a particular drag, according to the CSO.

The Department of Finance in April cut its MDD forecast for 2022 to 4.2% from 6.5%, expecting the impact of the war in Ukraine to slow rather than stop growth as the year progressed. Modified domestic demand expanded by 6.5% last year.

While consumer confidence has fallen sharply for four consecutive months and inflation has climbed to an almost 40-year high of 8.2%, other more recent data suggests the squeeze on incomes has yet to hit consumer spending.

Retail sales rose by 3.8% month-on-month in April while data yesterday showed that tax revenues were 27% higher in the first five months of the year compared to the same time last year with income tax, corporate receipts and VAT all up sharply.

Unemployment has also returned to its pre-pandemic level of 4.7%, CSO figures showed this week.

Commenting on today's CSO figures, Minister for Finance Paschal Donohoe said that while GDP growth was exceptionally strong in the first quarter, part of this was a "washing-out" of some of the one-off factors that led to the unusual negative quarter at the end of last year.

"It is important also to put these volatile figures into context. GDP is not an accurate measure of what is going on in the domestic economy, given the size of the multinational sector," the Minister said.

He said today CSO figures confirm a weak first quarter for the domestic economy as a result of numerous headwinds at the start of the year, including the Omicron-wave, inflationary pressures and the increased uncertainty related to the war in Ukraine.

"While business investment was also weak in the first quarter, it is encouraging to see investment in new housing continuing to grow with the level of housing supply up by almost half compared to same quarter last year," he said.

"The 32,000 housing starts in the 12 months to April point to the momentum in house building," he added.

The Minister also said that today's figures need to be considered alongside the very strong first quarter jobs numbers.

"We have a record 2½ million people in employment and the unemployment rate of 4.7% in May is the lowest since 2006. Wages are rising, with total earnings up 2½ per cent on the quarter and 15% compared to the first quarter last year according to today's figures," the Minister added.

"The war and the subsequent waves of economic and financial sanctions represents a large supply-side shock to the global economy. As a result, inflationary pressures have risen sharply, with the annual rate of inflation in May estimated at a multi-decade high of 8.2% on the back of sharp increases in energy prices," he added.