Timber frame manufacturer Cygnum is creating 50 jobs as it aims to increase its overall output by more than 60% over the next two to three years.

The company has invested €7m during the past five years in its plant in Macroom in Co Cork.

Operating in Macroom since 1997, Cygnum currently produces 850 houses for the Irish market a year and it aims to produce 1,350 homes each year.

The Cygnum facility in Macroom is the most automated timber frame plant in Ireland and the UK, and currently produces five houses a day.

The onsite team engineers and designs the structural timber frame walls, floors and roofs. The digital information is then transferred to the highly automated processing lines on the factory floor, before the finished product is loaded onto trucks for assembly on site.

According to Forest Industries Ireland (FII), rapid-build timber homes have the dual benefits of only needing three to five months to construct, while they also save 12 tonnes of carbon dioxide emissions compared to conventional builds. 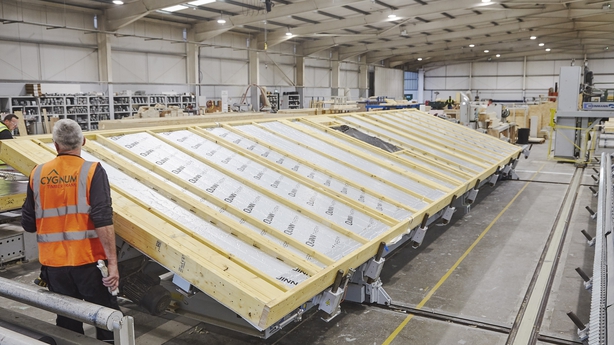 "Timber is the most environmentally friendly mainstream construction material, which means that the houses we manufacture are not only helping to tackle Ireland's housing crisis, but also supporting the transition to a carbon neutral future," Mr Desmond said.

"Over the last five years, we have invested €7m at our site here in Macroom, which will ultimately lead to the creation of up to 50 new jobs," he added.

Enterprise Ireland recently launched the 'Built To Innovate' funding programme, an initiative under the Government's Housing For All plan to improve productivity and reduce the cost of residential construction.

Tánaiste Leo Varadkar said the 50 new jobs and the increased output are a boost for the company and for the Co Cork area.

"This expansion will also help the Government’s efforts to increase the housing supply, with Cygnum producing timber frames for 1,350 homes every year. These are quicker to construct and also help to reduce carbon dioxide emissions," Mr Varadkar said.

"With a record number of people now at work in Ireland, I remain determined to ensure that jobs are available right across the country. Companies like Cygnum make that possible," he added.