The annual rate of inflation rose to 7% in April, according to figures published by the Central Statistics Office - its highest rate in 22 years.

The CSO said this marked an increase from 6.7% in March and was the largest annual increase in inflation since November 2000 when inflation also stood at 7%.

The CSO said that increases in utility bills and transport costs accounted for almost three quarters of annual inflation.

While fuel prices did decline slightly compared to March, diesel is over 40% higher than a year ago while petrol is 24% higher.

Electricity bills are 28% higher and gas bills took a big jump and are now just over 50% higher than April last year. Home heating oil is just over 90% higher than a year ago.

Meanwhile, Central Bank Governor Gabriel Makhlouf has said that the ECB "needs to act" on the current level of inflation which he described as "concerning".

The Central Bank Governor's comments to Ibec's National Council this morning is the latest signal that the ECB is prepared to increase interest rates, possibly as early as July, in response to escalating inflation.

"We have reached the point where we on the ECB's Governing Council need to act," Gabriel Makhlouf said.

He went on to say it was realistic to expect that interest rates are likely to be in positive territory by early next year. Deposit rates at the ECB are currently -0.5%.

"I am acutely aware of the impacts of inflation on people's lives and businesses - it affects the whole community, and some more than others," Gabriel Makhlouf told the Ibec conference.

"We know that those who are disproportionately affected are lower income households, older people, and rural households. We have reached the point where we on ECB's Governing Council need to act," he said.

"Our objective is for inflation to be at 2% over the medium term - levels are significantly above that now, and it is time for the Council to move to end net asset purchases under the asset purchase programme next month or in July," he added.

The monthly decline in some energy prices from March to April reflects how prices have come down from elevated levels seen during the first weeks of Russia's invasion of Ukraine. However, they are still significantly higher than a year ago.

The price of some services did decline by 1.6% compared to last year. 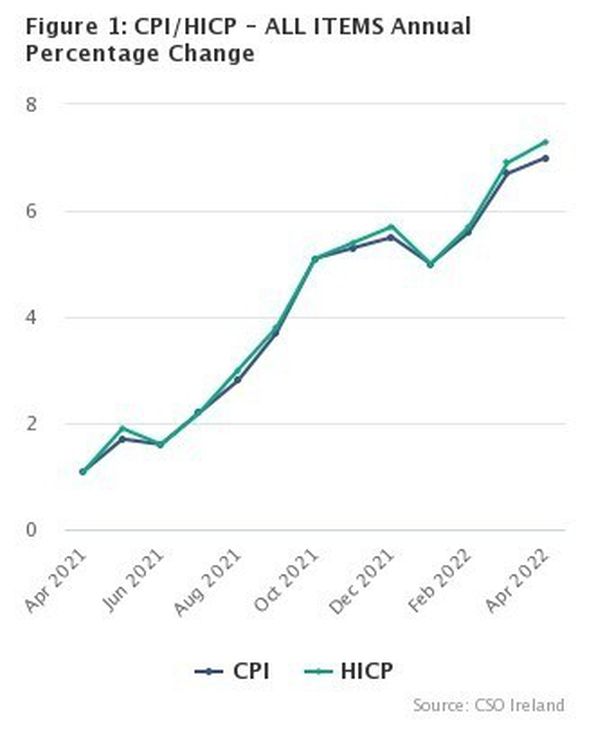 Private sector rents are up 9.3% on an annual basis while the price of hotels was up 20%.