New figures from the Irish Tourism Industry Confederation suggests that the sector continued to recover in March - traditionally the period that kick-starts the tourism season with the Saint Patrick's Festival.

The Irish Tourism Industry Confederation's Tourism Dashboard is published in association with AIB and compares each month to the same month in 2019, the last normal year for the Irish tourism industry.

Using carrier and port data ITIC extrapolates inbound visitor numbers by market based on past performance.

Today's figures show that arrivals to the country were 31% lower in the month when compared to the same, pre-pandemic month of 2019, but that is a smaller gap than had been seen earlier in the year.

North American traffic continued to lag and is still down 45% on 2019 levels.

Hotel occupancy for March stood at 73%, the dashboard also showed today, while the latest jobs data from the CSO show that 26,000 fewer people are working in the tourism and hospitality industry.

ITIC warned that rising costs and the war in Ukraine presented significant challenges for the sector in the coming months.

"Air access is positive for the summer so overall in 2022 we are hoping for a 60% recovery in inbound tourism numbers compared to 2019 which would be no mean feat considering the mauling that the industry has faced in the last two years," he added. 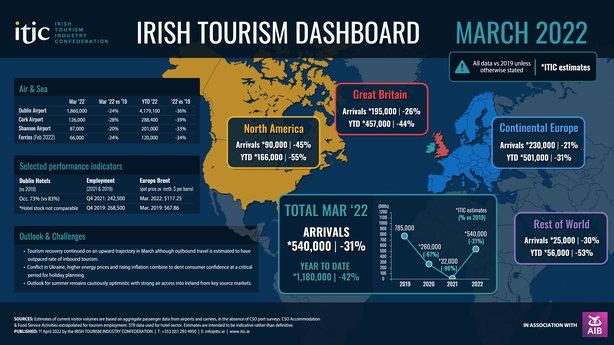 Mr O'Mara Walsh warned that the war in Ukraine, inflation and labour shortages will put a handbrake on the sector's recovery.

"The Government needs to stay the course in terms of supporting the tourism industry to full recovery. This includes maintaining investment in the sector and deferring the scheduled tourism VAT increase later this year," he added.

But she added that optimism is underlined by higher inflation, rising energy costs and the impact of the invasion of Ukraine.