Last week ICS Mortgages raised its fixed interest rates for new customers - the first lender to do here so in many years.

Irish interest rates may consistently rank as the highest in the euro zone, but some fixed options currently offer some (relative) value to certain customers. They may just need to move soon to make the most of it.

Are fixed rates going up?

ICS Mortgages is the first lender to raise its fixed rates, but it's not expected to be the last.

That's in part because the European Central Bank has signaled its intention to raise its base interest rate - possibly before the end of the year.

However even ahead of that, rapidly rising inflation and higher borrowing costs on financial markets are set to make lending more expensive for mortgage providers.

Ultimately, that gets passed on to customers.

"Interest rates are probably going to move back up, either due to the ECB or, as was the fact also with ICS, the fact that on those capital markets there’s a rising pressure," said Frank Conway, founder of financial advisory service MoneyWhizz.org.

"[ICS] have already pinned the increase to their fixed rate on inflationary pressures being felt across Europe and globally," said David Kerr, founder and group CEO of Bonkers.ie.

"It’s very likely that others will follow suit - the implication being that, as inflation has started to raise its head, the likelihood is that the bank interest rate for mortgages will likely increase."

The exact point at which fixed rates will rise is hard to predict but - if change is coming - the 'fixed' category tends to be the first to move.

By definition fixed rates are the only kind of mortgage rates that - once in place - can't change, even if the ECB bumps up its base rate. That means mortgage providers will want to ensure they're ahead of any impending shift in the market.

But lenders are also fighting for market share and will be wary about moving too quickly, for fear of giving their competitors a short-term advantage.

"For banks themselves the market right now is extraordinarily generous, they want to get business in and the cost of funds for most of them is still very, very low," said Mr Conway.

"What you’ll find is the non-bank lenders will be under that element of pressure… they're the canary in the coal mine." 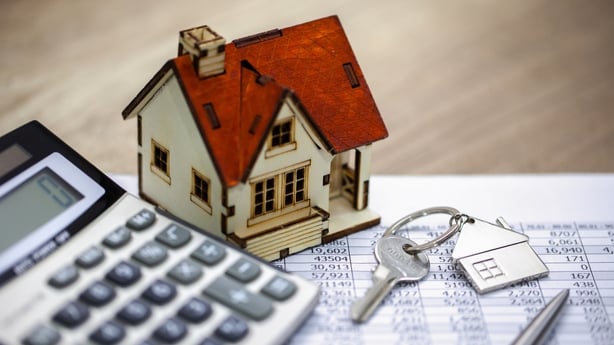 While it's hard to know when other lenders will increase their fixed rates, the general consensus is that the era of falling fixed rates is over for the foreseeable future.

But as banks have been keen to tie people down to the predictability of a fixed rate, it means those options are still priced competitively compared to variable equivalents.

"Now is an excellent time to look at fixing your mortgage rate, especially if the rates now are lower than you’re currently paying," said David.

Most lenders' fixed rates are lower than their standard variable offerings. In some cases the difference is stark.

"The fixed rates are just very competitive - it’s very hard to beat that," said Mr Conway. "If you're fitting into a budget right now, with all of the other things going on, with inflation of utilities, if you do need that certainty for at least that bit of time - you're probably not going to get anything better out there."

The rates on offer are even better for homes with a lower LTV ratio - which many properties may have quietly drifted into as a result of rapidly rising house prices.

Some lenders are also offering cheaper fixed rates on 'high-value mortgages' - generally loans of €250,000 or more - while there are also reduced 'green' rates on homes with a BER of B3 or higher.

But whatever the specifics, if there is a fixed rate that is particularly suitable to you right now, the advice is to start the ball rolling on the switch sooner rather than later.

"You should look now, because it takes time to present yourself to a bank or a broker and to get your mortgage approval in principal and then your loan offer," said David Kerr.

"Even if you don’t think that the mortgage interest rates won't increase for a couple of months, it does take that long to present yourself to a bank in a way that they can accept.

Is changing a lot of hassle?

If you are looking to stay with your current lender but just switch to another one of their rates, it should be relatively straight-forward.

"Generally banks can flip you over fairly quickly," said Frank Conway. "It’s minimum hassle and minimum time, and the banks will normally have a process to facilitate that.

"Provided they're happy with the valuation from the property - they might do a drive-by or get a market average in the area."

But if you are looking to move to a different lender entirely, it gets a little bit more complicated.

"It's only when you’re taking on new debt at a bank that you have to be more careful," said Mr Conway.

Moving lender is akin to applying for a new mortgage outright, which means submitting lots of paperwork and enlisting the services of a solicitor.

That can be a lot of hassle - and potentially an up-front cost too - but it's a small price to pay if it will save you thousands of euro. Some lenders may also offer cashback to switchers - which is designed to cover the costs involved in making a move.

Is there a reason why I shouldn't fix?

Fixing isn't the best option for everyone.

That's particularly the case for those still on a tracker.

"Even on a 1% tracker on a 0% ECB basis, you're doing far better than anyone else in the market right now."

But even some people currently on a variable interest rate may not see an overall benefit from fixing.

That's because the small print of a fixed rate tends to include a penalty on customer who decide to abandon the rate early. The size of that penalty can depend on a number of factors, including the amount left on the loan and the interest rate being charged, but it could ultimately amount to a significant sum of money.

So if you're thinking of moving in the near future - or potentially going to be in a position to clear your mortgage early - the cost of fixing could end up being higher than the savings you enjoy.

"If somebody is thinking that they might be moving property in a year or two, the break fees can put people off," said Frank Conway.

"It could be six months of interest, it could be a couple of grand," he said. "Depending on the mortgage itself it could be five, six, seven or eight grand - it depends on the loan size, how far you're into it, and how long remains on the fixed rate."

He said the prospect of a break fee may be enough to put some people off fixed rates entirely. However it is always worth checking the specific bank’s terms and conditions to see exactly what the cost would be.