New figures from the Central Statistics Office show that residential property prices outside of Dublin continued to grow a higher rate than in the city in the year to January.

The CSO said that home prices increased by 14.8% nationally in the year to January - the fastest rate of growth in almost seven years.

It compared to an increase of just 2.5% the same time last year and was also higher than the growth rate of 14.3% in December.

But the rate of monthly growth eased to 0.9% from 1% in December, the CSO noted.

The CSO noted that the highest house price growth in Dublin was in Dublin City at 15.1%, while South Dublin saw a rise of 12.3%.

The region outside of Dublin with the biggest increase in house prices was the Border at 24.7%, while at the other end of the scale, the Mid-West saw a 13.8% increase.

Property prices nationally have increased by 115.6% from their trough in early 2013, the CSO said today.

A total of 3,517 home purchases at market prices were filed with Revenue in January of this year, up 0.9% compared to the 3,484 purchases in January 2021, with the total value of transactions filed in January coming in at €1.2 billion. 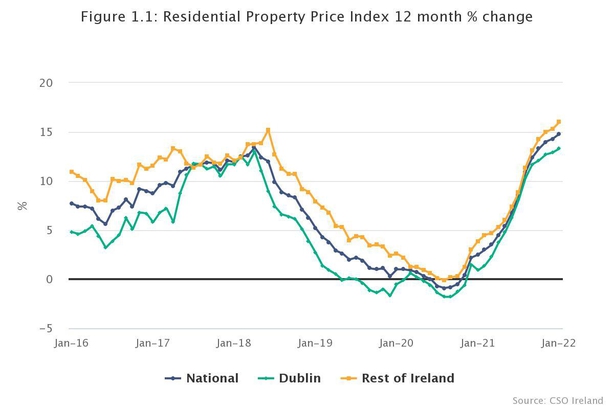 In the year to January, 46,452 home purchases were filed with Revenue. Of these, 31.9% were bought by first time buyer owner-occupiers, while former owner-occupiers purchased 53.8% and the rest were acquired by non-occupiers.

Meanwhile the Eircode area with the highest median price for household dwelling purchases was A94 'Blackrock' with a price of €697,500.

Outside of Dublin the most expensive Eircode area over the last 12 months was A63 'Greystones', with a median price of €499,950.

Commenting on today's CSO figures, KCB Bank Ireland chief economist Austin Hughes said the January increase brings Irish house prices back within 3.3% of their 2007 Celtic Tiger' peak meaning that the previous peak will probably be overtaken in these official data in the next few months.

The economist said he expects the very bumpy path to a slower and more sustainable pace of increase in Irish house prices will continue.

"The market is currently dominated by buoyant home-buyer demand. In the near term, this is underpinned by a strong jobs market and the prospect of faster wage growth in 2022 as well as a rebuilding of household deposits in December 2021 and January 2022," Austin Hughes said.

But he added that the increased global uncertainty and the likelihood of rising ECB interest rates later this year as well as the expectation of improved new housing supply may introduce some increased caution into the market.

"For these reasons, we may be close to peak pressures at the moment but we may not be at peak prices," he added.