A new report today warns that unless the Government incentivises and supports dealing with the oldest polluting cars, a key environmental policy to have almost a million electric vehicles on the road by 2030 will be a huge challenge.

The report on reducing light fleet carbon emissions to achieve Government targets was commissioned by the Society of the Irish Motor Industry (SIMI) and was released today by Arup and economist Jim Power.

It states that in order to deal with the older legacy fleet, help will be required for those with the least economic capacity to make the biggest change.

This requires more investment, not just at the top end of the market, to remain fair and equitable if Ireland is to provide all commuters with viable transport options, it added.

Today's report also states that of equal importance is the urgent need to create a second-hand electric vehicle fleet.

The age profile of the national fleet has led to the continued use of older polluting vehicles with more than 700,00 (31.1%) of vehicles being pre-2011 or older.

Analysis shows that removal of all these cars and replacing them with EVs would reduce carbon emissions by 875,000 tonnes - the equivalent of planting over 1.1 billion trees.

"The ambition to sell nearly a million electric vehicles by 2030 is extremely challenging," the report stated.

The report also highlights that the European Commission aims to have 30 million EVs on the road by 2030 and estimates that three million public chargers will be needed to support them.

By the same measure, Ireland would need 100,000 public chargers, with all new being fast chargers to serve the proposed one million EVs here by the same date. 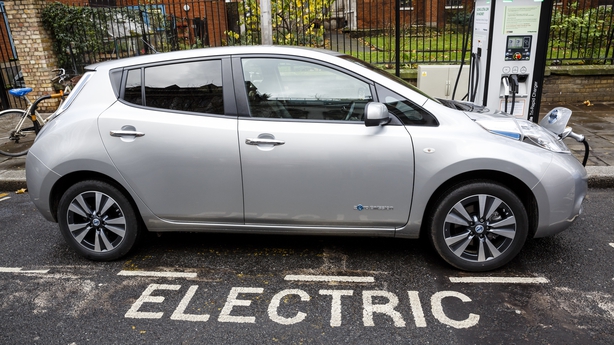 There are currently 1,900 chargers installed at 800 sites across the island of Ireland. But with the current number of 47,000 EVs on roads here the number of charging points falls far short of the 4,700 realistically needed to serve these.

Economist Jim Power said that to sell 945,000 electric and low emitting vehicles by 2030 - in line with Government policy - is an extremely ambitious target.

"Ireland is a relatively small right-hand-drive economy and has a slower and smaller supply chain with around 120,000 new car sales per annum (pre-Covid-19) and an average car fleet age of nine years," Mr Power said.

"Government support is essential in creating this business environment, through EV grant subsidies, incentives and supporting infrastructure investment which will encourage consumers to take action and expedite sales," he added.

Brian Cooke, Director General of SIMI, said that with over 2.2 million cars in the national fleet, the journey towards decarbonisation includes all vehicle owners.

"While the new car market will deliver large numbers of Electric Vehicles over the next decade, we must remember that the majority of motorists buy a used car, and for them, particularly those in older cars, their EV journey will be longer," he said.

"We need to deal with the legacy fleet, a fleet that continues to age due to the low levels of new car sales. We need to support all motorists to trade up to newer less polluting cars," he said.

"This has two clear benefits; it can deliver an immediate reduction in overall emissions; and it can shorten the journey time for all owners into an electric vehicle. In this context, electrifying specific fleet sectors can help in the creation of an affordable strong used EV market, removing the barriers to entry for many, and accelerate the electrification of the Irish car market," the SIMI boss added.