A new survey reveals that almost 70% shop around for car insurance every year, and more than half do so for home insurance - but less than 40% will look for a better electricity and gas deal.

The research carried out by Peopl.ie, a nationwide provider of home and life insurance, looked into the prevalence of switching insurance and home utility bills.

"Our tendency to look around for better deals on our big yearly expenditures appears to be different depending on the product," said Paul Walsh, CEO at Peopl Insurance.

"While 68% of people shopping around for their annual car insurance might seem on the face of it a good statistic, we would question what the other 32% are doing - if they are simply accepting their current provider's quote at renewal time then the odds are they could be overpaying by hundreds of euro," he said.

He said the same goes for home insurance and electricity and gas, which even less people shop around for.

"In reality, it means that thousands of people across the country are paying too much on their various insurance premiums.

"The point we want to get across is, regardless of the product, there are really no instances where you should simply auto-renew without first seeing if there’s better value to be had," Mr Walsh said.

Mr Walsh is encouraging consumers to shop around for all of their policies.

"If you’re on the wrong deal, or are paying too much for your home or motor insurance – simply ditch-it and switch-it.

"Thousands of households across Ireland are suffering from higher price inflation, and much of this pain can be alleviated by switching provider," he said.

The research suggests that men more likely than women to switch their policies.

For electricity and gas bills, 68% of men reprice at least every three years, compared to 57% of women.

The report also reveals that age has a role to play in switching behaviour, depending on the product.

"The most active age group of switchers for car insurance is 25-34 year-olds," Mr Walsh said.

"It's easy to understand why the younger groups are more proactive when it comes to repricing car insurance on a yearly basis - because the premiums paid by motorists can be heavily dependent on age and driving experience," he explained.

"In terms of home insurance, it is 45-54 year-olds who are most inclined to shop around," he added. 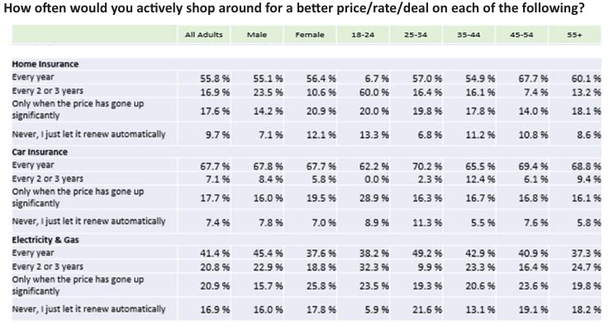