The Minister for Finance has strongly encouraged businesses who availed of the Covid-19 wage subsidy schemes, but subsequently had a strong financial year, to consider their positions.

Paschal Donohoe said some companies which had performed well after they received the payments had ultimately decided that the State support was not required by them and returned what they had received to Revenue.

He said 402 employers had repaid the subsidies that they had received in full, to the value of €52m, while 3,331 employers had made partial repayments totalling €54m.

Mr Donohoe made the comments at the Oireachtas Committee on Finance, Public Expenditure and Reform, and Taoiseach while taking questions about the operation of the Employmnent Wages Subsidy Scheme (EWSS) and its precursor, the Temporary Wage Subsidy Scheme (TWSS).

His appearance followed revelations that a sizeable number of companies in receipt of the subsidies had gone on to make substantial profits which were in some cases then paid out as dividends to shareholders.

The finance minister said the question of what dividends a company may or not be in position to pay to shareholders is a matter outside the current legislative remit of the scheme.

But he reiterated that he would keep it under review and assess whether it would be appropriate to introduce further conditionality into it.

"However, I am strongly of the view that it would be important that any changes are proportionate and don't interfere in any way with the overarching policy rationale underpinning the scheme, which is to maintain employment," he told the committee.

"Over 700,000 employments have been supported by EWSS, we should not lose sight of this important goal." 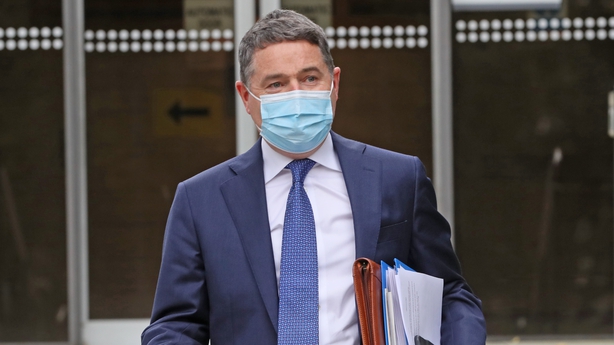 Mr Donohoe said the overall support provided to-date by EWSS and TWSS combined is almost €10 billion, with over €7 billion going to the EWSS alone.

Questioned by Fianna Fail's Jim O'Callaghan about whether when the schemes were being designed, was conisderation given to including a ban on the payment of dividends or buyback of shares by participating companies, Mr Donohoe said they did consider additional conditionalities beyond turnover and tax compliance.

But he added that he decided that it wouldn't be appropriate for the EWSS as he anticipated very low levels of dividend payments among the participating firms across the period and he also had concerns about the execution of such conditionalities, because it would raise the prospect of dividends being deferred until after the scheme ended.

Mr Donohoe also said it was to be expected that some of the companies on the EWSS would continue to be profitable, but at lower levels than pre-pandemic and a certain degree of profitability could be positive in some cases.

However, he also stated that payment of dividends was not in the spirit of which both the scheme was launched and the overwhelming majority of employers operated the scheme.

Sinn Fein's finance spokesman, Pearse Doherty, said his party had warned theminister of the risk of the dividend payment issue when the legislation underpinning the EWSS was being brought through the Oireachtas.

He said the UK Government had ensured dividends couldn't be paid out from companies receiving supports and the European Central Bank had banned dividend payments to banks.

There was a design flaw in the scheme, he claimed, and the Minister for Finance had allowed the problem to happen.

Regarding the issue of insurers deducting the value of state supports from claim settlements made under business interruption insurance, Mr Donohoe said that such deductions would appear as having been justified as being in-line with the established insurance principle of indemnity.

But he added that the Government was concerned that such action could be seen as representing a subsidy for insurers and furthermore, was not in-line with the prevailing spirit under which these extraordinary supports were provided.

He said in most instances the issue does not arise because there are well-established measures whereby State supports are not provided if losses are already covered by insurance, or where they are they can be refunded to the State.

Consideration was also given, Mr Donohoe said, to whether the Government could legislate to have the money returned by insurers to the State, but legal advice was that legislation could not be enacted retrospectively.

The minister said there is a lack of transparency though around the issue and lessons had been learned.

As a result, the Insurance (Miscellaneous Provisions) Bill, which is currently being drafted, would include a provision to allow the Central Bank collect data regarding State supports deducted from final settlements he told the committee.

The Bill would also require insurers to tell policyholders of any such deductions of public money from the final settlement amounts.