Toyota said it would extend stoppages at some factories in Japan as it runs short of components from plants in Southeast Asia where production has been disrupted by Covid-19 lockdowns.

Lost production from the latest halts will now total about 14,000 vehicles in December, up from 9,000 units it flagged on Friday, Toyota said in an email.

The cuts, which affect Lexus models and its Land Cruiser, come as the world's biggest automaker by production volume tries to make up for production lost to earlier supply-chain disruptions in Malaysia and Vietnam.

Toyota said it is sticking to an annual global production target announced in September of 9 million vehicles for the year to March 31.

Meanwhile, Toyota has committed 8 trillion yen ($70 billion) to electrify its automobiles by 2030, half of it to develop a battery electric vehicle (BEV) line-up, as it looks to tap a growing market for zero-emission cars.

The world's biggest carmaker is a relative latecomer to full electric cars.

It said it expected annual BEVs sales to reach only 3.5 million vehicles by the end of the decade, or around a third of its current vehicle sales.

That is less than bigger rivals such as Europe's biggest carmaker Volkswagen, which in July predicted that half of its global vehicle sales will be battery-powered cars by that date.

It comes as traditional automobile firms increasingly take on Tesla, which has become the most valuable carmaker this year. 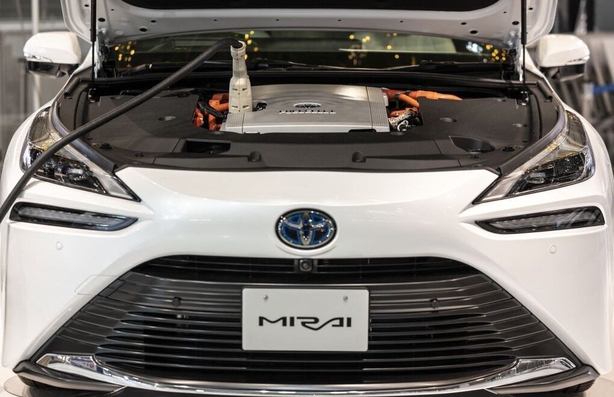 "We want to leave all people with a choice, and rather than where or what we will focus on, we will wait a little longer until we understand where the market is going," Toyoda said.

His company's plan to introduce a full line-up of 30 BEV's by 2030 goes beyond the 15 models Toyota earlier said it would have available by 2025.

The Japanese carmaker today also said it planned to invest 2 trillion yen in battery production by 2030, up from the 1.5 trillion yen it announced earlier.

That investment includes $1.29 billion for a new battery plant in North Carolina that will begin production in 2025.

EVs still only account for a small portion of car sales, but the market is growing rapidly, with new registrations up 41% in 2020 even as the global car market contracted by a sixth that year.

In November, Toyota declined to join a pledge signed by six major carmakers, including GM and Ford to phase out fossil fuel cars by 2040.

But it argued that not all parts of the world would be ready to transition to green cars by then.

Toyoda said the technology could help to save some of Japan's 5.5 million car jobs by allowing the company to keep supply chains that would disappear with a full shift to electric cars.