Dublin City Council has refused permission to plans by Johnny Ronan for a 10 storey over basement 44 unit build to rent apartment scheme for Dublin's Appian Way.

The council refused planning permission after finding that the scheme's excessive height, scale and density on a small visually prominent site constitute overdevelopment of the site.

It said the RGRE and J&R Valery's Ltd scheme for a site at the junction of Lesson Street Upper and Apian Way would have an unreasonable overbearing, visually dominant effect on adjoining sites.

The local authority also found that the proposed scheme "with its unjustifiable height and density fails to integrate or be compatible with the streetscape along both Appian Way and Leeson Street Upper".

The council concluded that the scheme "would seriously injure the visual amenities of the streetscape and would have an adverse impact on the character of the area". 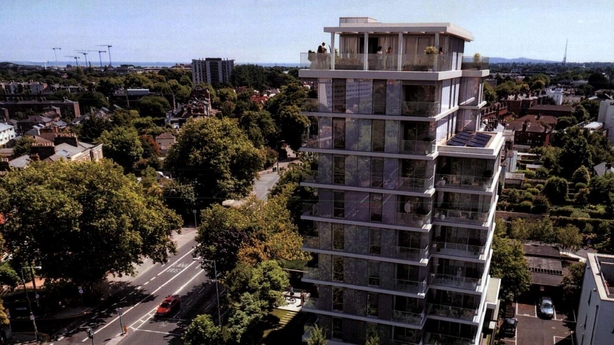 In the comprehensive refusal, the council also concluded that the proposed development would by itself and by the precedent it would set for other development, seriously injure the amenities of property in the vicinity and be contrary to the provisions of the Dublin City Development Plan.

The council also pointed out that the development is located on a heavily trafficked road which is a Quality Bus Corridor and planned Bus Connects route and in an area where there is limited on street car-parking available.

It said that no car parking provision within the site is proposed and as a result the development would generate overspill parking, drop-offs and servicing activity onto the adjacent Leeson Street Upper and footpaths thereby causing an obstruction to pedestrians, cyclists, bus services and other road users resulting in traffic safety hazard.

The local authority has told the Ronan firm that the development "would endanger public safety by reason of traffic hazard".

The council refused planning permission after the Upper Leeson Street Area Residents Association lodged a strident 12 page objection against the Ronan scheme which is made up of 29 studio apartments and 15 one bed apartments.

The scheme is planned for a 0.092 hectare site at the junction of Appian Way and Leeson Street Upper.

Planning consultants for the applicants, John Spain & Associates contended to the Council that the proposal would provide "a quality build to rent residential development in an existing urban area adjoining high quality public transport".

The Spain submission further contended that the 10 storey height "contributes to the wider streetscape and urban form of the area" and also "provides much needed accommodation in a highly accessible area well served by public transport".

However, Armstrong Planning on behalf the Upper Leeson Street Area Residents Association, said "we object to the proposed development in the strongest possible terms on the grounds that the height, form and scale of the scheme in close proximity to the established, mainly two storey over basement residences of the immediate area, is completely out of character with the local built form and as such would militate against the principles of proper planning and development of the area".

In one of 12 objections lodged against the scheme, Armstrong Planning stated that the "simple realty is that the proposed tower would be visually incongruous in the existing site context which is not expected to change and would be out of character with the area by reason of its vastly excessive height in material contravention of the City Development Plan and should be refused accordingly".

The objection stated that the height of the tower at 34.4 metres "is simply too high for the site in such close proximity to nearby residences".

Armstrong Planning also stated that the 100% proportion of one bed units "is indicative of a seriously unsustainable form of development for the site".

The Ronan firm now has the option of appealing the council decision to An Bord Pleanala.