The boss of Aer Lingus and British Airways owner IAG said today its transatlantic bookings had already reached nearly 100% of 2019 levels after the United States dropped restrictions earlier this month.

Airlines such as BA and Virgin Atlantic had pinned their hopes on the reopening of the Europe to US routes as vital to rebuilding their finances, after more than 18 months of restrictions left them nursing billions of dollars of debt.

Luis Gallego told the Airlines UK conference that the group was recovering, and he expected a return to pre-pandemic flying levels by 2023.

"Now as the world opens up, we are growing our capacity," he said.

"Transatlantic bookings have already reached almost 100% of 2019 levels. I expect North Atlantic routes to reach full capacity by next summer," he added.

Gallego warned however that a move by London's Heathrow Airport to hike charges could hit the recovery, and he noted that the 40% of passengers who use the airport to transit on to different final destinations could use alternative hubs.

The UK's Civil Aviation Authority's (CAA) has made an initial proposal for Heathrow to be allowed to charge as much as 50% more per passenger over the 2022-2027 period.

"If the rise in landing charges goes ahead, I know IAG would not be alone in reconsidering our airlines' use of Heathrow as a port," he said.

"Right now, aviation is trying to emerge from its worst crisis ever. UK operators need to be able to compete," the IAG CEO added.

Meanwhile, the UK competition regulator is examining whether IAG's planned €500m purchase of Spain's Air Europa would harm competition in the UK, the watchdog said today. 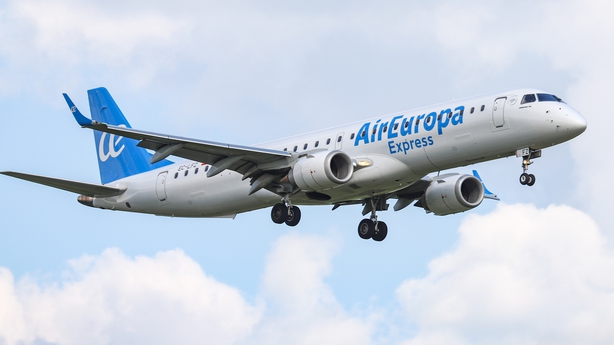 IAG had announced its plans to buy Air Europa for €1 billion in 2019, but the price was cut in half this year after the airline industry was sent into a tailspin by the Covid-19 pandemic.

The British company has already offered concessions to address EU competition concerns over the deal, a filing showed last month, though details were not provided.

The European Commission opened an in-depth investigation in June, voicing concerns that the proposed transaction would reduce competition on Spanish domestic routes and on international routes to and from Spain.

The deal, which involves Iberia buying Air Europa on behalf of IAG, had sparked opposition from the Unite union over jobs and from rival carriers.

The UK's Competition and Markets Authority (CMA) said it has a January 19 deadline for its initial investigation decision.

"We will collaborate with the CMA. The London-Madrid route is highly competitive and is already part of the European Commission (investigation) process," IAG said today.