Construction firms continued to experience strong growth in activity in September, despite the latest Ulster Bank Construction PMI easing for the fourth month in a row.

The Ulster Bank Construction PMI - which track changes in total construction activity - posted a reading of 56.3 in September, down from 57.5 in August.

Index readings above 50 signal an increase in activity on the previous month and readings below 50 signal a decrease.

Ulster Bank said the slowing in activity was an unsurprising development following the exceptionally and unsustainably rapid growth rates recorded as the sector snapped back following its post Covid-19 lockdown reopening.

"At 56.3, the headline index of overall activity still points to very solid growth on a par which that experienced in the three years prior to the pandemic, while it also points to faster growth than signalled by the latest construction PMIs in both the euro zone and UK, " the bank added.

Today's PMI shows that overall growth was again driven by housing and commercial activity, both of which increased sharply.

The stronger increase was again seen for residential activity despite some softening of growth, with the rate of expansion in commercial activity quickening since August.

But civil engineering activity fell for the second month in a row. 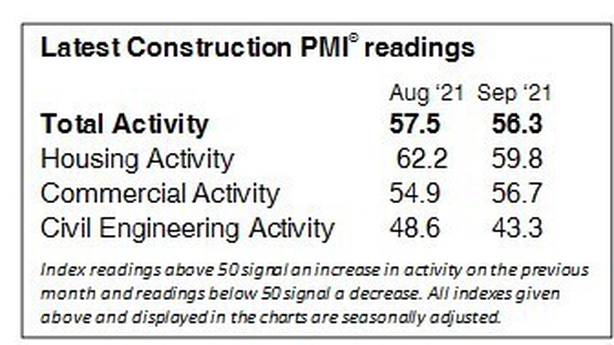 "Irish construction firms report that their activity, orders and employment levels continue to benefit from the strengthening of demand conditions which has accompanied the easing of restrictions on the sector itself as well as on the wider economy," Ulster Bank's chief economist Simon Barry said.

But Ulster Bank noted reports of ongoing supply-side challenges, partly linked to the pandemic and to Brexit.

"Nevertheless, despite such headwinds, firms remain confident about the 12-month ahead outlook as sentiment was again above long-run average levels, if down from August. Just under half of all respondents anticipate activity gains in the coming year, with optimism linked to expectations that the ongoing release of pent-up demand will continue to support growth," the economist added.