Over €6 billion in funding was transferred from central Government departments to local authorities last year, an increase of 46% on the €4.17 billion in 2019.

That is according to a report published by the Comptroller and Auditor General (C&AG), which outlines how Government funds are allocated to local authorities and the purposes for which funds have been provided.

The report states that the increase of €1.91 billion was primarily due to funding for Covid-19 related costs, which accounted for €1.42 billion.

Other significant increases related to housing and regeneration and roads.

The Department of Housing, Local Government and Heritage provided 97% of the funding for local authority expenditure on housing and regeneration last year.

According to the report, that funding is used by the local authorities for social housing stock and other housing supports, including the Housing Assistance Payment (HAP), the Rental Accommodation Scheme (RAS) and accommodation for homeless people.

The funding is also used to improve the existing local authority housing units and for grants for older people and people with disabilities.

The figures show that the Government transferred over €2.5 billion euro to local authorities for housing and regeneration in 2020 - that is up from almost €2.4 billion the previous year.

Over €2.1 billion of last year's funding went to the provision of social housing. 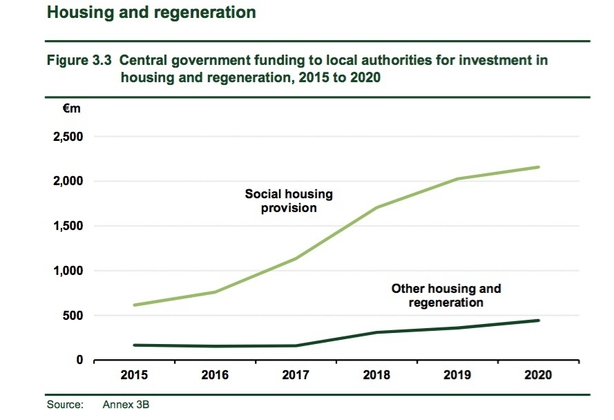 Over €1.1 billion of funding was transferred to local authorities to invest in the area of transport - that is up from €882 million in 2019.

€573 million was allocated for the upkeep of regional and local roads, while €429 million was provided for the improvement and maintenance of national roads and €109 million for improvements in the public transport system.

Meanwhile, the Department of Rural and Community Development provided €11 million to local authorities for improvement works on non-public roads in rural areas and roads on offshore islands. 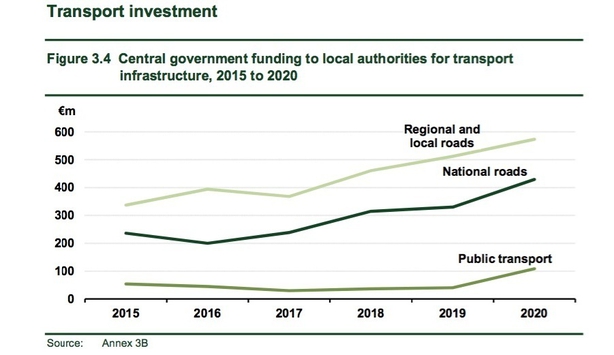 The C&AG report reveals that €31 million was provided by the Office of Public Works to 29 local authorities for flood relief works last year.

€26 million was provided for waste management programmes, including €12 million in relation to landfill remediation.

However, there was a significant drop in water and sanitary services funding in 2020.

This relates to the absence of funding from the Local Government Fund, which was €47 million in 2019.

"This line of funding was provided from 2014 to 2019 in lieu of commercial rates imposed by local authorities in respect of Irish Water facilities located in their areas," the report states.

The compensation payments from the Local Government Fund ended from January 2020.

A total of 91 million euro was transferred to local authorities last year from Central Government for employment schemes.

This funding increased to €117 million in 2020, compared to €87 million the previous year.

In 2020, €45 million was provided for sports grants, playgrounds and cultural services.

The report also reveals that central Government provided additional funding of €1.42 billion to local authorities to mitigate the impact of Covid-19.