The labour force stood at just over 2.5 million people (2,533,200) in the second quarter of this year, according to the latest Labour Force Survey from the the Central Statistics Office.

The Covid adjusted measure of unemployment, which takes into consideration those on the PUP, was 16.2% at the end of the second quarter but this has since fallen further to 12.4% at the end of August.

Employment in all sectors rose in the second quarter on an annual basis with the numbers employed in industry up 10% compared to the same period in 2019.

However, employment in some sectors still lags behind pre-pandemic levels. There were 60,000 or a third fewer workers employed in the Accommodation and Food sector compared to the second quarter 2019 and 18,900 or 12.9% fewer construction workers in employment.

The long term damage done by Covid to the labour force can also be seen in the increase in the long-term unemployed defined as those without work for over a year. 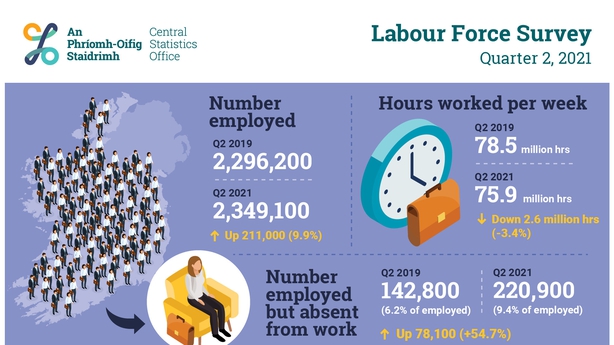