The OECD has today warned of an "uneven" global economic recovery as it lowered its 2021 growth forecasts for the world and the US while raising the outlook for Europe.

The world economy has bounced back this year on the back of stimulus measures, the rollout of effective Covid vaccines and the resumption of many economic activities, the Organisation for Economic Co-operation and Development (OECD) said.

"The recovery remains very uneven, with strikingly different outcomes across countries," the OECD said in its interim economic outlook.

Global output is now expected to expand by 5.7% this year, down 0.1 percentage points from the organisation's previous forecast in May.

"Output and employment gaps remain in many countries, particularly in emerging-market and developing economies where vaccination rates are low," the report said.

The OECD lowered its growth outlook for the USs, from 6.9% to 6% this year. The US Congressional Budget Office has forecast 6.7% growth for the world's top economy.

The OECD's euro zone forecast, however, was raised by one point to 5.3%, though the outlook varied within the single-currency bloc, with higher growth now expected in France, Italy and Spain while Germany was not performing as well.

The growth prospects of Argentina, Brazil, Mexico, South Africa, South Korea and Turkey have also improved, while those of Australia, Britain, Japan and Russia were lowered.

The forecast for China, the world's second biggest economy and a driver of global growth, remained unchanged at 8.5%.

The impact of the Delta variant of the coronavirus has "so far been relatively mild" in countries with high vaccination rates, but it has lowered the momentum elsewhere and added pressures to global supply chains and costs, the OECD said.

"Faster progress in vaccine deployment, or a sharper rundown of household savings would enhance demand and lower unemployment but also potentially push up near-term inflationary pressures," it said.

However, it added, "slow progress in vaccine rollout and the continued spread of new virus mutations would result in a weaker recovery and larger job losses."

Earlier this month, United Nations chief Antonio Guterres expressed disappointment that vaccine-manufacturing nations have been unable to ramp up production toward the goal of vaccinating some 70% of the world population by the first half of 2022.

"Covid-19 is a wake-up call, and we are oversleeping," Guterres said.

Chinese authorities have the capacity to keep the debt crisis at property developer Evergrande in check and the broader fallout should be limited, OECD chief economist Laurence Boone said today.

"We think that the Chinese authorities do have the fiscal and monetary capacity to buffer the shock," Boone told a news conference on the OECD's latest economic forecasts.

"The impact here would be fairly limited except for obviously some special companies," she added. 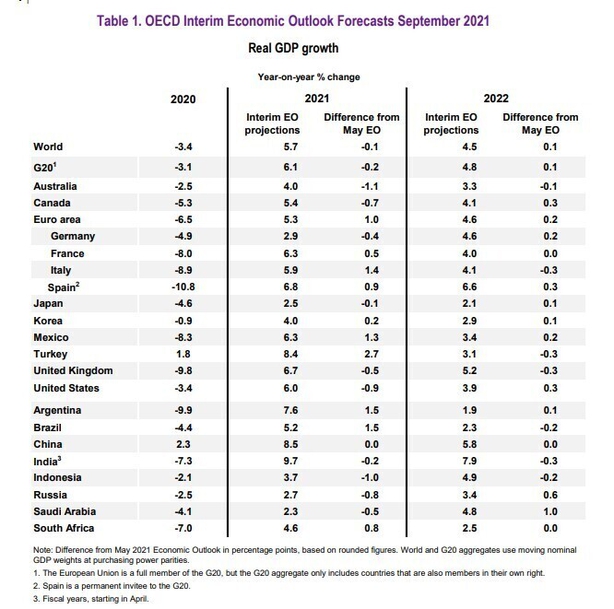