New preliminary figures from the Central Statistics Office show that seasonally adjusted goods exports decreased by 5% to €13.182 billion in July compared with the previous month.

The CSO said that seasonally adjusted goods imports also decreased by 12% to €8.072 billion.

This resulted in an increase of 11% in the seasonally adjusted trade surplus to €5.110 billion million in July compared with the previous month.

On an annual basis, the CSO said that exports of Organic chemicals decreased by 38% to €1.698 billion in July of this year compared to July 2020, while exports of Medical and pharmaceutical products decreased by 10% to €4.5 billion.

The CSO said that exports of Electrical machinery, appliances and parts rose by 31% to €945m, and exports of Professional, scientific and controlling apparatus were up 26% to €630m.

Meanwhile, imports of Other transport equipment (including aircraft) fell by 42% to €1.054 billion, while imports of Organic chemicals decreased by 41% to €657m.

Today's figures show that imports of Electrical machinery, appliances and parts were up 76% to €507m and imports of Petroleum jumped by 108% to €383m.

Today's figures show that imports from Northern Ireland in the first seven months of 2021 increased by 60% to €2.122 billion when compared with the same time last year. 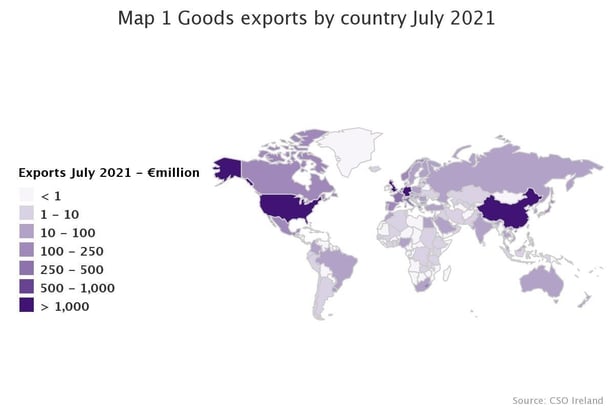 The CSO said that imports from Great Britain in July fell by 32% to €983m with the largest decreases in the imports of Food and live animals and Machinery and equipment, with an increase in the imports of Mineral fuels, lubricants and related materials.

Imports from Great Britain were 13% of the value of total imports in July 2021, the CSO added.

Today's figures show that the EU accounted for 35% of total goods exports in July of which €1.318 billion went to Germany, €831m went to the Netherlands and €714m went to Belgium.

The US was the main non-EU destination accounting for 28% of total exports in July, while the EU accounted for 34% of total goods imports in July - down 10% compared with the same time last year.