New figures from Kantar show that grocery sales dipped by 2.3% in the 12 weeks to September 5 as people slowly returned to their pre-pandemic routines.

Kantar noted that an extra 189,000 trips were made to supermarkets over the past three months, driven by shoppers running out for one or two items at a time rather than relying on a big weekly shop like they did during the height of the Covid lockdowns.

It said this suggests that the high vaccination levels across the country are helping to boost consumers' confidence.

Kantar said that the strong performances for bricks and mortar stores meant online sales dropped by 12.3% in the past four weeks.

"Online grocery shopping has taken a backseat this month as people return to workplaces, education, and eating out. As a result, digital grocery shops shrunk by an average of four items over the course of the latest four weeks," commented Emer Healy, a retail analyst at Kantar.

"However, we expect this decline to soften in the coming months as shoppers find their feet in their new routines," she added.

Emer Healy also noted that preparing meals from scratch, a popular pandemic pastime, has slipped down the agenda.

"Parents were also stocking up on lunch box favourites like children's biscuits, bread and cooked meats which grew by 11.3%, 7.6% and 14.6% respectively," she added.

Today's figures show that SuperValu was the largest retailer in the period under review with a 22.5% share of the market. 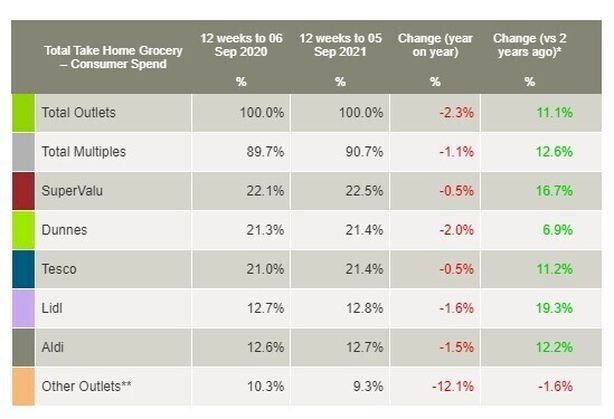 This was driven by consumers visiting the store 7% more often than they did last year - the highest shopper frequency among all the retailers - which led to a sales boost of €43m for the company.

Dunnes saw the greatest influx of new shoppers among all the retailers, with the number of shoppers up 5.3%, which contributed €32m to its sales. Dunnes is tied with Tesco for the title of second-largest grocer, and both hold a 21.4% share of the market this period.

Tesco, which gained 0.4 percentage points of share, was particularly successful in terms of growth for brands, which grew by 2.9% to buck the overall market decline in branded sales this period.

Meanwhile, Aldi achieved its highest ever market share this period at 12.7% as it gained a significant number of new shoppers over the past three months which increased its sales by €1.6m year on year.