Residential property prices rose on an annual basis by 8.6% - the fastest annual pace in three years - in July, according to the latest figures from the Central Statistics Office.

The figures also show that the number of property transactions is now back to pre-pandemic levels.

Overall nationally, property prices rose on an annual basis by 8.6% in July. Prices in Dublin rose by 8.1% while prices in the rest of the country rose by 9.1%.

South Dublin saw the biggest price rise of 11.2%. Outside of Dublin, houses rose by 8.7% while apartments rose by 14.6%. Prices rose fastest in the Border region, with growth of 16.2%.

Measured on a quarterly basis, the price of new dwellings rose by 2.2% in the second quarter compared to the same quarter in 2020. This was down slightly on the annual rate recorded in the first quarter.

The rate of price increases of existing dwellings, however, doubled in the second quarter to 6.7% compared to the same time last year.

The CSO said the volume of transactions from January to July now stands at 24,280, just marginally below the 24,416 properties purchased in the same period, pre-pandemic, in 2019. 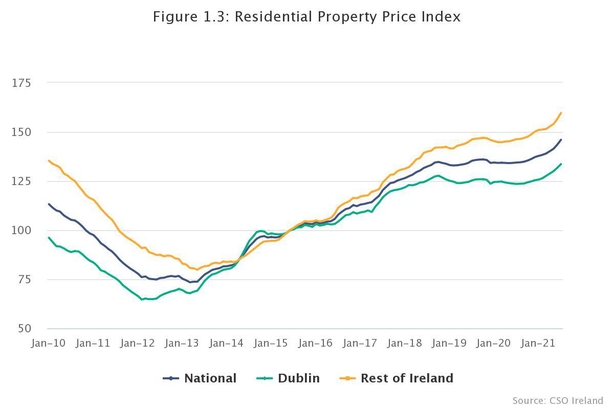 The Eircode with the most expensive median house price remains A94 Blackrock, in south county Dublin at €650,000.

F45 Castlerea in Co Roscommon and H23 Clones in Co Monaghan remain the least expensive at €90,000.

Commenting on today's figures. Joey Sheahan, Head of Credit at MyMortgages.ie, said the housing market is seeing a flurry of activity at the moment - as evidenced by the 3,822 transactions filed with Revenue in July alone.

Mr Sheahan said that first time buyers make up a strong cohort of buyers as always, but we would expect that if the Help-to-Buy Scheme is extended in the upcoming budget - as expected - their share of the market will continue to grow.

He also said the percentage of new homes bought has also increased which hopefully is a sign of greater construction output in a market where the delivery new homes is absolutely crucial.

Brokers Ireland noted that many areas of the country reached or exceeded double digit growth year-on-year in July.

Rachel McGovern, Director of Financial Services at the organisation - which represents 1,225 broker firms - said this level of increase is "unhealthy for potential buyers and the economy at large."

"With the exception of the release valve presented by new blended working arrangements that would appear to have increased the appeal of areas like the South-East and the Midlands which are seeing an 11% increase in prices, home ownership in the most populous areas of Dublin and its environs has largely become the preserve of those on higher incomes or those with strong financial support from family," she said.

Ms McGovern said that on the basis of today's figures, prices look like they will remain elevated for the foreseeable future.

"There is only one answer to soaring prices and that is to increase the supply of new homes," she added.