An Bord Pleanála has granted planning permission for the long anticipated €400 million redevelopment of the O'Devaney Gardens site in Dublin.

The scheme by Richard Barrett's Bartra is comprised of 1,047 residential units and includes 10 apartment blocks.

The units are made up of 1,024 apartments and 23 houses with the site located in the north west inner city, adjoining the residential area of Stoneybatter.

One of the apartments blocks is to reach 14 storeys in height with two others rising to 12 storeys.

After a deal struck between Bartra and Dublin City Council, half of the scheme is to be made up of social and affordable homes.

The breakdown of the housing will be 30% social housing, 20% affordable and 50% private housing.

Addressing the housing mix and the development agreement between Bartra and the city council, appeals board inspector, Elaine Power concluded that the scheme is "unique" due to its location, scale and mix of tenure "and is critical and integral to the success of national policy in addressing both housing and homelessness in the city and consolidating the urban environment".

The Dublin City Development Plan allows building heights of up to 24 metres for the area and the 14 storey tower reaches to 46.8 metres in height.

Four other blocks in the scheme also exceed the 24m height limit for the area.

However, Ms Power stated that the area can accommodate increased heights proposed and that the number of units proposed will assist in achieving national policy objectives for significant housing delivery in an urban area with substantial amenities.

Ms Power concluded that the material contravention of the city development plan concerning heights for the area is justified.

An Bord Pleanala received 44 third party submissions in response to the proposal.

Ms Power stated that the submissions are generally supportive of the redevelopment of the site - but did outline the concerns expressed over height, design, and residential amenity.

A special condition of the permission forbids the sale of the residential units to institutional investors.

The condition states that units are restricted to individual purchasers or those qualifying for cost rental or social housing.

In its decision, the board says this is to ensure an adequate supply of housing for the common good. 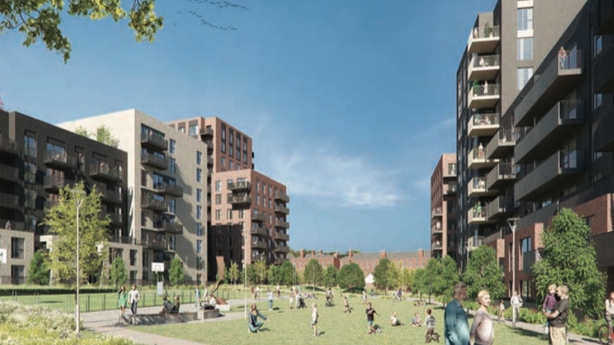 In its own submission, Dublin City Council voiced its approval for the scheme.

However, in a strident objection, Stoneybatter resident, Rob Kenny stated that he was "horrified" at the Bartra plan.

Self described TV and Radio presenter, TV stylist and PR Director, Mr Kenny said that the scheme is "obtrusive, intimidating and in no way fitting with the style or character of its surrounds".

"I have heard numerous neighbours say that with these plans, combined with the plans for the Infirmary Rd developments and Montpelier Hill there will be no point in living in this area soon, which many of us love deeply and have put all of our money into," Mr Kenny added later in his objection.

Pat Corrigan of Oxmantown, D7 told the appeals board that the height of the buildings, including one at 14 storeys, "is way too high and doesn't fit with the existing heights in the area".

Mr Corrigan argued that the scheme "will dwarf the historic village of Stoneybatter".

O’Devaney Gardens located close to the Phoenix Park in Dublin was built in the 1950s and was made up of 278 flats accommodating more than 1,000 people.

The Council began moving tenants out around 17 years ago in preparation for the scheme’s demolition.

However, progress to redevelop the site has been hit by several setbacks since including builder Bernard McNamara pulling out of a public private partnership scheme in 2008 as the economy faltered.

By the time the deal had collapsed, most the flats had been emptied and the estate had become a magnet for vandalism.

As a result, the council decided to press ahead with the demolition.

A spokesman for Bartra today welcomed the appeals board decision to grant planning permission.

"We are looking forward to progressing with the development and delivering 522 social and affordable homes, and a further 522 private homes," he said.

He said that the development "will also encompass two new parks, dedicated cultural and community spaces, shops, a café and a crèche, enabling us to build a sustainable, enterprising community that stimulates a thriving local economy, and meets the needs of future residents".

"We will now commence preparations for construction before the end of 2021, and it is estimated that construction will continue onsite until mid-2025," he added.

He said over 400 jobs will be created during the construction phase.

"We will be working with the main contractor to recruit locally for both full time positions and apprenticeship opportunities.

"When the development is completed there will be ongoing employment opportunities across retail, hospitality, maintenance, and services."

Developers Bartra had originally applied for 824 units but the plan provoked controversy as 50% would be going to the private market from a site owned by Dublin City Council.

Councillors agreed to the development after Bartra said it would sell 30% to the council for use as cost rental reducing the private element to 20%.

The other 50% would remain as social and affordable.

Bartra subsequently applied to increase the height and density with the number of units increasing from 824 to 1,047.

The deal to include 30% cost rental was agreed with the Dublin Agreement parties of Fianna Fáil, Greens, Labour and Social Democrats.

After permission was announced, councillor Joe Costello (Lab) called on Bartra to honour it.

In statement, Bartra said the issue was still under discussion.