Australia's top central banker has said that the coronavirus lockdowns would cause a sharp contraction in the economy this quarter.

But he said he was confident activity would rebound quickly once restrictions were eased in coming months.

Despite that near-term optimism, Reserve Bank of Australia (RBA) Governor Philip Lowe also reiterated that interest rates were not expected to rise from record lows until 2024 given persistently sluggish wage growth.

"These expectations are difficult to reconcile with the picture I just outlined and I find it difficult to understand why rate rises are being priced in next year or early 2023," Lowe said after noting the huge inertia in wages in Australia," he said.

"While policy rates might be increased in other countries over this timeframe, our wage and inflation experience is quite different," he added.

Wage growth in Australia is running at a miserly 1.7% while Lowe argued it would need to top 3% at least to get underlying inflation up into the target band of 2-3%, something not achieved since 2015.

For the near-term, Lowe acknowledged that the lockdowns across Sydney, Melbourne and Canberra would likely see the economy contract by at least 2% in the September quarter, and possibly by significantly more.

Unemployment was also expected to reach the "high fives" for a short period, he said. The jobless rate stood at 4.6% in July.

"This is a major setback, but it is likely to be only temporary," said Lowe. "We expect the economy to be growing again in the December quarter, with the recovery continuing into 2022."

Much of this optimism was due to a rapid pick up in vaccinations which the government believes should allow restrictions to be eased from mid-October onwards. 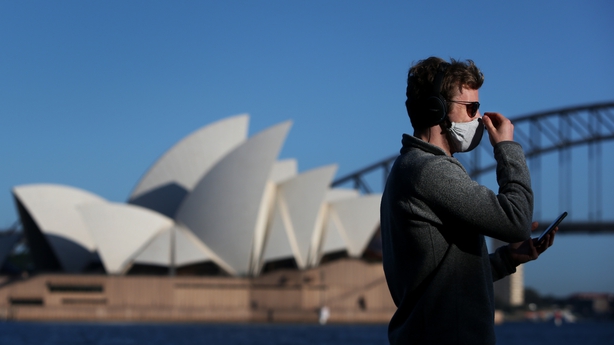 The upbeat outlook was supported by surveys of businesses and consumers out today which showed a marked improvement.

"While we expect a large hit to activity in Q3, the survey supports our view that once restrictions are eased, activity will rebound," said NAB chief economist Alan Oster.

A survey of consumers from ANZ showed New South Wales' plan to start opening up in October had an immediate impact, with confidence surging 10.6% in the state.

Figures from the Australian Bureau of Statistics out today showed home values jumped a record 6.7% in the June quarter to be up 16.8% on the year.

While surging prices have stoked concerns about a lack of affordability, Lowe dismissed calls to fix the problem by raising interest rates.

"Society-wide concerns about the level of housing prices are not best addressed through increasing interest rates and curbs on lending," said Lowe.