The construction sector reported another month of rapid growth in August, the latest Ulster Bank Construction Purchasing Managers Index shows, as it continued to benefit from improvements in demand after the reopening of the sector.

Ulster Bank noted that the rate of expansion did ease for the third consecutive month in August, but from what was an exceptional pace recorded immediately after the sector's reopening.

Ulster Bank said the months from May to July was the second strongest three-month period for overall activity in the survey's 21 year history.

Today's figures showed that housing and commercial activity continued to rise, with the former continuing to post the faster pace of expansion.

But the three-month sequence of growth in civil engineering activity came to an end with a modest reduction in August.

New orders increased for the fifth consecutive month, and at a rapid pace that remained well above the series average due to fewer Covid-19 restrictions and stronger customer demand.

But Ulster Bank said that efforts to secure materials were hampered by ongoing supply-chain disruption.

"Lead times lengthened to an extent unseen prior to the pandemic as a combination of global material shortages and Brexit disruption caused delays," the bank stated.

It said these supply issues contributed to a further sharp increase in input costs, with increased shipping rates also reported.

The rate of inflation softened from July's record high but was still the second-fastest since the survey began in June 2000. Copper, steel and insulation were among a range of materials signalled as costing more over the month.

Meanwhile, those rising workloads led companies to expand their staffing levels again in August, extending the current trend of job creation to five months. Ulster Bank noted that the rate of increase was the fastest since May. 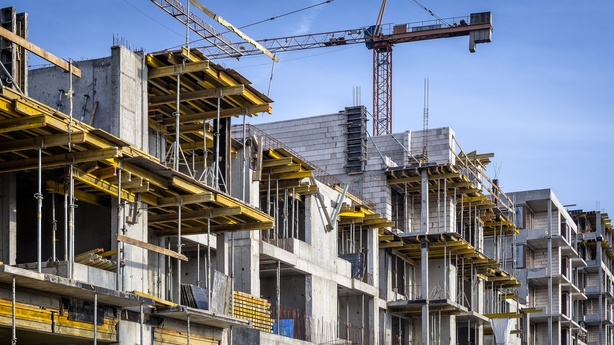 Simon Barry, chief economist at Ulster Bank, said that while the August PMI results were not quite as exceptional as the last few months, they do point to a sector that is enjoying strong growth as it continues to benefit from the re-opening of the economy which has been facilitated by the easing of public health restrictions.

"The post-reopening recovery was again evident in another month of very rapid increases in new business, albeit that some modest easing of new orders growth also came through in this area of the August results," Simon Barry said.

"Firms reported that the post-lockdown strengthening of demand, activity and orders which has taken hold in recent months is leading them to continue to boost their staffing levels. In fact, the pace of jobs growth signalled by the survey accelerated last month to the fastest since May," the economist said.

"That said, supply-chain developments continue to represent a notable headwind for construction firms, with the August survey again picking up evidence of material shortages and supply-chain disruption (some of which is Brexit-related), albeit that there was a very slight easing in the pace of input cost inflation from July's record high," he added.