The number of people on the Live Register and the Pandemic Unemployment Payment (PUP) fell 6.9% to 323,010 in August, new figures from the Central Statistics Office show.

This is reduction of almost 24,000 on the figure for July.

According to the latest CSO figures, the seasonally adjusted figure for those on the Live Register in August was 168,400, down 1,600.

The high point was April 2020 when the incomes of almost 1.2 million people depended on one of these schemes.

Today's CSO release also contained a figure for the number of long term unemployed, defined as those without work for over a year, who are availing of so-called "activation programmes" to return to work.

Earlier this week the CSO reported that the unemployment rate stood at 12.4% in August, when those on the PUP are included. This was down from 13.5% in July. 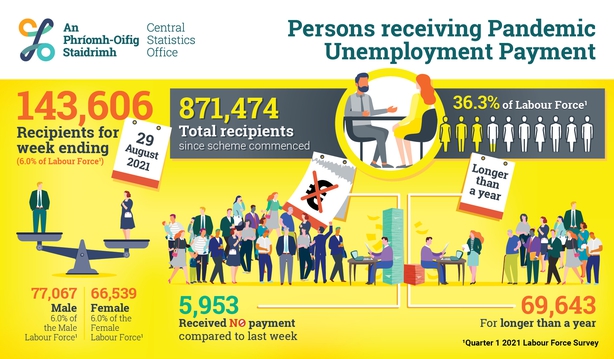 The CSO said the seasonally adjusted traditional rate of unemployment was 6.4%, down marginally from 6.5% in July. The same measure was 7.1% in August last year.