New figures from the Central Statistics Office show that the economy - as measured by Gross Domestic Product - grew by 6.3% in the second quarter of 2021 compared to the first three months of the year.

On an annual basis, GDP showed growth of 21.6% in the second quarter, the CSO said, as the economy was in the depths of the Covid-19 crisis last year.

Meanwhile, GNP - a measure of economic activity that excludes the profits of multinationals - increased by 6.7% in the quarter.

The CSO said the easing of Covid-19 related restrictions led to higher levels of economic activity for many of the sectors focused on the domestic market in the three months from April to June.

It noted that the Construction sector grew by by 22.9% while the Distribution, Transport, Hotels and Restaurants sector increased by 0.7%.

Growth also continued in the more globalised sectors of the economy with the Information and Communication sector increasing by 6.2% and Industry growing by 3.6% in the three month period.

Overall, the sectors dominated by foreign-owned multinational enterprises grew by 3.7% compared with the first quarter of the year while value added in the domestically focused sectors increased by 2%.

Today's CSO figures also show that as the Covid-19 curbs eased, personal spending on goods and services increased by 12.6%.

Government spending on goods and services increased by 0.9% in the quarter, the CSO added.

This is the first time since the onset of the pandemic that both the domestic and export focused parts of the economy have registered strong growth.

Today's figures also show that the Modified Domestic Demand (MDD) indicator - a measure of the underlying performance of the economy - increased by 8.4% on a quarterly basis.

This was the second highest quarterly growth rate on record, second only to the third quarter of last year, when the economy bounced-back after the first Covid-19 lockdown.

MDD grew by 15% on an annual basis, the CSO added.

Commenting on today's figures, Finance Minister Paschal Donohoe said that all sectors in the domestic economy recorded strong growth in the second quarter of 2021, with consumer spending and construction particularly strong. 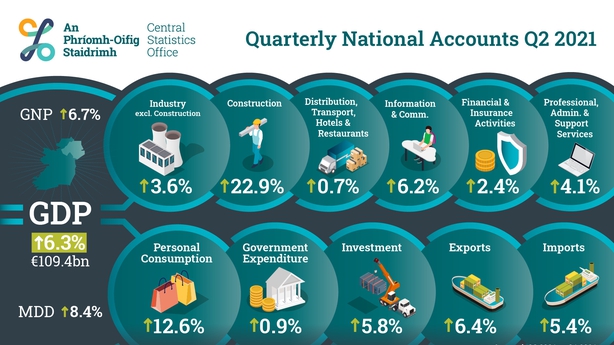 Paschal Donohoe noted that consumer spending increased by 12.5%, though it still remains below its pre-pandemic level.

"Looking at housing in particular, in the four quarters to end of the second quarter this year, there were roughly 21,000 housing completions and 27,000 starts. This will provide much needed momentum into the second half of this year, with housing supply set to be further boosted by the Government's new Housing for All strategy," he added.

The Finance Minister predicted that the recovery in MDD is expected to continue in the third quarter with more sectors re-opening, although at a somewhat softer pace.

He said that data from payment card transactions showed positive but easing rates of growth in spending in July and August.

"Similarly in the labour market, the numbers of persons on the pandemic payment has fallen by 70% from the third wave peak of 486,000 in early February, with large declines seen throughout June and July, though the pace of decline moderated in August," he added.

"While I am conscious that there are many risks on the horizon, not least in terms of the unpredictable epidemiology of the virus, today's positive economic data alongside the robust tax data for August which we are publishing later today, mean that we can approach the forthcoming Budget with a far greater degree of confidence than at any time since the pandemic began," Mr Donohoe stated.

Much of this is down to the continuing strong performance in the pharmaceutical and computer services sectors, both of which are dominated by foreign-owned multinationals.

In an analysis accompanying today's figures, the CSO shows how the industrial sector, which includes pharmaceutical companies, grew by 158% since the first quarter of 2019.

The Information and Communication sector, which includes the computer services sector, grew by 143% over the same period.

The CSO also revealed some headline results from a survey it conducted with 60 of the largest firms in these sectors.

For computer services companies, the main areas of activities contributing to growth were software licensing, web-enabled services and the research and development of products.

A breakdown of today's CSO figures shows how dramatic the recovery has been in certain parts of the domestic economy.

The sale of clothes rose by about 190% in May, compared to April. Department store sales rose by almost 170% in the same month while the sale of books rose by around 140% in the month of June.

Accommodation and food also saw a 90% increase in the month of June.

Overall personal consumption expenditure rose by 12.6% in the second quarter compared to the first, up 6.9% for goods and 16.8% for services.

On an annual basis, personal consumption expenditure was up 19.4% with the consumption of goods up 27.3% and services up 14.5%.

As has been the pattern during the lockdown, online sales fell back as shops reopened, the CSO noted.

Commenting on today's CSO figures, Ibec economist Hazel Ahern-Flynn said they showed broad-based growth among domestic-facing sectors, on the back of growing consumption and investment, while Ireland's export growth continues on its impressive upwards trajectory.

Ms Ahern-Flynn said the improvements in domestic demand are a welcome signal that the recovery is now being felt more widely across the economy.

"While this is positive news, this strong growth brings its own challenges as both labour constraints and input prices continue to rise on the back of increased demand," she said.

"As the resumption of normal activity continues, the focus can now shift towards supporting a sustainable and continued recovery, along with leveraging the available resources to invest in Ireland's future growth," she added.