The country's population was estimated to stand at 5.01 million in April, new figures from the Central Statistics Office show today.

This marks the first time the population has risen above five million since the 1851 census, when the comparable population stood at 5.11 million.

The CSO said the combination of positive net migration and natural increase resulted in population growth of 34,000 (0.7%) in the year to April 2021.

This is the lowest level of natural increase recorded since the 2000 population estimates, the CSO said.

These combined flows gave positive net migration - more people arrived than left - of 11,200 in the year to April, compared with 28,900 in the previous year. 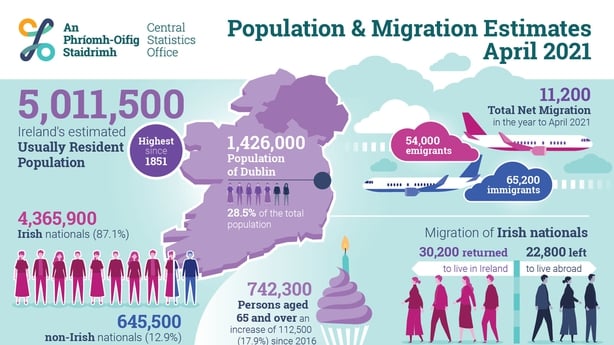 The Dublin region experienced weak growth in the year and increased its population by just 8,300 people to five, a rise of 0.6%.

Dublin's population in April of this year was estimated to be 1.43 million people, which equates to 28.5% of the country's total population.

Commenting on the results, statistician James Hegarty said: "Ireland's population was estimated to be 5.01 million in April 2021, which is the first time the population has risen above five million since the 1851 census, when the comparable population was 5.11 million.

He also said that today's figures cover the 12 months to April 2021 and they reflect some of the demographic and social impacts of Covid-19.

The statistician told RTÉ's News at One that migration into Ireland is one factor which accounts for the rise in the country's population to over 5 million people.

"So 7,000 more Irish people returned to live in Ireland than left to live abroad and that's only the third time since 2010 that more Irish have returned than left," he stated.

He said the general population has grown by about 6% since 2016, while there has been an increase of about 18% in those over age 65.

He also said while Dublin accounts for just under a third of the Irish population, its growth within the year was about 8,000, while it grew by three times that amount last year.

There was a pattern in the 2016 Census when around 5,000 more people left Dublin than arrived into the capital, a pattern he said "that may well have been accelerated during the pandemic as well".

Commenting on today's figures, KBC Bank Ireland's chief economist Austin Hughes said that while there is some trend easing in what is by international standards an exceptional speed of population growth in Ireland, the slowdown in the past year can be significantly attributed to pandemic-related restrictions on international travel.

"This suggests scope for some compensating rebound in pace of population increase through the next couple of years," Mr Hughes said.

"In turn, this suggests demographic factors look set to remain an important source of both support and pressure for the Irish economy for some time to come," he added.