The total value of imports from Northern Ireland into the Republic jumped by more than three quarters in the first six months since Brexit compared to the same period last year, according to new data from the Central Statistics Office (CSO).

Goods worth €1.77bn were brought into the country from the north between January and June, up from €998m in the same six months in 2020.

In the month of June itself, imports from Northern Ireland rose 93%, from €174m in the same month last year to €337m.

At the same time imports from Great Britain dropped by 32% over the same six month period in comparison to a year earlier and by 16% in the month of June.

Overall exports increased by 1% to €13.7bn in June compared with May, the data shows.

The value of goods exports in June was €14.4bn representing an increase of 6% when compared with June 2020.

In the period January to June the value of goods exports was €80.6m, a decrease of €1.38bn when compared to the same period last year.

The figures show that exports of medical and pharmaceutical products increased by 6% in June, making up 41% of total exports.

The value of imports increased by 4% to €9.04bn in the month of June while the value of goods imports for January to June was €48bn, an increase of 20% compared with the first half of 2020.

Imports of organic chemicals increased by +202% during the month compared to the same month in 2020.

Electrical machinery, apparatus and appliances increased by 189% while petroleum imports increased by 65% over the same comparative period. 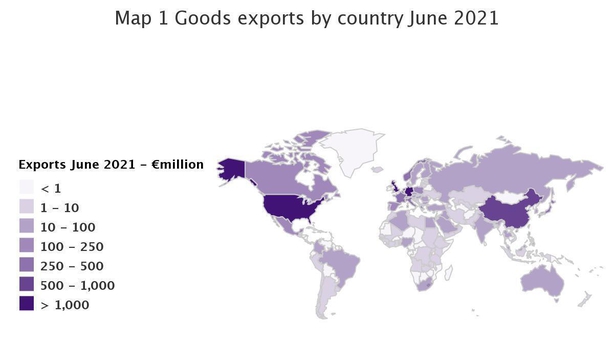 Exports to Great Britain in June rose 68% to €1.4bn compared with June 2020. The largest increases were in the exports of chemicals and related products and machinery and transport equipment.

Exports to Great Britain accounted for 10% of total exports in June.

Imports from Great Britain decreased by -16% to €1.09 billion compared with June 2020. The largest decreases were in the imports of food and live animals and manufactured goods. 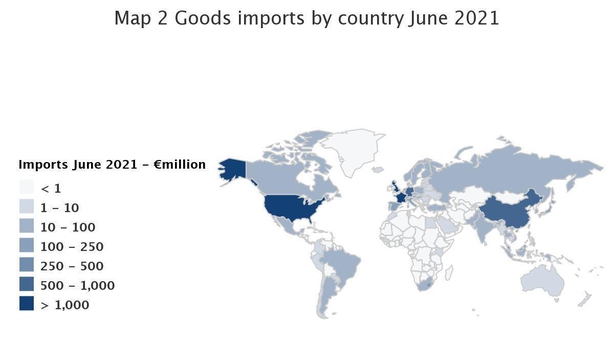