There was a fall in online spending as consumers returned to shops and spent more on their credit and debit cards in-store in June, according to statistics from the Central Bank.

Spending on cards in-store increased by 10%, or €304 million, last month compared to May, while online spending fell by 5%, or €133 million.

The reopening of hotels saw card spending on accommodation increase by 184% in June, or €140 million. Spending in restaurants increased by 41%, or €97 million as outdoor dining recommenced. Hospitality saw its fourth consecutive month of growth. 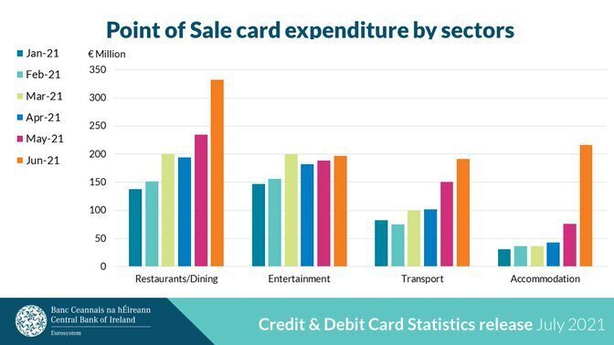 According to the figures, total card spending, including ATM withdrawals, rose by 3%, or €237 million in June compared to the previous month, while the latest daily data to July 19 shows total spending is broadly in-line with June.

For the second consecutive month, ATM withdrawals increased by 6% month-on-month, to €1.1 billion, its highest level since December 2020. However, ATM withdrawals continue to remain significantly subdued compared to pre-pandemic levels.

The volume of card transactions, excluding ATM usage, grew in June, with the number of transactions increasing by 5%. In annual terms, this represents an increase of 20% compared to June 2020. In nominal terms the average value of all transactions fell marginally, to €43 per transaction.

Social spending rose by 24% compared to May, driven by an increase in restaurant spending of 41%, as outdoor dining recommenced in early-June.

Meanwhile, a separate analysis of consumer spending by Bank of Ireland for the week ending July 25th showed a shift in spending patterns to coincide with the recent heatwave.

Sales of paddling pools were up 171% when compared to the previous week.

The exceptionally high temperatures also proved to be a boon for visits to amusement parks and carnivals, where spending was up 8%, and for popular tourist attractions and exhibits, where there was a 10% increase in spending.

Spending on car rentals were up by over a fifth during the heatwave as people flocked to beaches and beauty spots nationwide to soak up the sun.

Spending on air conditioning and refrigeration repairs was up by over a third.

In contrast, cinema spending declined 19% for the week.

"Anyone living in Ireland knows that the next rain shower is usually never that far away, so the knowledge of knowing we were going to enjoy an unbroken spell of tropical weather made it all the more enjoyable," Christian Pierce, Group Chief Data and Analytics Officer at Bank of Ireland said.

"The data also shows that spending with travel agents and tour operators rose during the week of the heatwave, so people are clearly still keen to book foreign travel now that this option has been opened up for many as vaccine passports are issued," he added.