New figures from the Central Statistics Office show that households saved over €10 billion in the first quarter of the year - more than four times the amount usually saved at that time of a year.

The CSO said the high level of saving was due to incomes holding up or even increasing while spending was depressed during Covid-19 restrictions.

It noted that Covid-19 restrictions imposed after Christmas "severely limited" opportunities to spend on activities such as dining out.

The uncertainty around the trajectory of the pandemic may also have induced "precautionary savings" as households kept money back, anticipating tightening finances in the future, it added.

The largest proportion of the extra savings was added to deposits in Irish banks, today's figures show.

Most of these deposits are available immediately to consumers to use as restrictions ease, the CSO noted.

Saving also went into pension funds and paying off mortgages and other loans. But spending on new housing and improvement to homes was mainly unchanged compared to the same time last year, probably due to restrictions on construction activity.

Meanwhile on the income side, households were supported by government interventions.

The CSO said that government subsidies were up by €1.1 billion while social protection payments grew by €2.7 billion compared to the first quarter of 2020.

The subsides were paid to employers and then to workers as the Employment Wage Subsidy Scheme, while the increase in social protection payments was largely made up of the Pandemic Unemployment Payment. 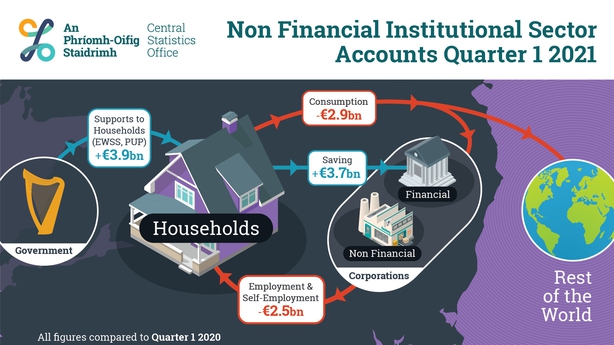 The CSO said that median income for those receiving the PUP declined compared to income when working.

But this fall in income was offset by higher median incomes for those in work.

The total wage bill in some parts of the economy, including the finance, IT, and public service sectors, rose due to higher earnings per week and more people being employed in those sectors.

The CSO said that even after higher taxes and social contributions are taken into account, overall gross disposable income rose.