Residential property prices rose at the fastest annual pace since the end of 2018 in May, new figures from the Central Statistics Office show today.

The CSO said that property prices gained 5.5% in May on an annual basis as the Covid-19 enforced shutdown of construction sites compounded a long-standing difference between low supply and high demand.

On a monthly basis, property prices were up 0.9% in May, the CSO said.

House prices in Dublin increased by 5.6% in May, while apartment prices rose by 1.8%. The highest house price growth in Dublin was in South Dublin at 6.6%, while Fingal saw a rise of 4.3%, the CSO noted.

Outside of Dublin, house prices were up by 5.7% and apartment prices increased by 14% in May.

The CSO said the region outside of Dublin that saw the largest rise in house prices was the Border at 10.7%, while at the other end of the scale the South West saw a 1.1% rise.

While the Covid pandemic briefly halted seven years of unbroken price growth last year, a second shutdown of construction from January to April has sparked a sharp rise in prices.

Overall, the CSO said that property prices are 13.5% below a 2007 peak before the bursting of a property bubble.

Property websites have reported that asking price inflation is running at twice as high a rate, up 13% in June, according to the country's largest property websites Daft.ie and MyHome.ie. 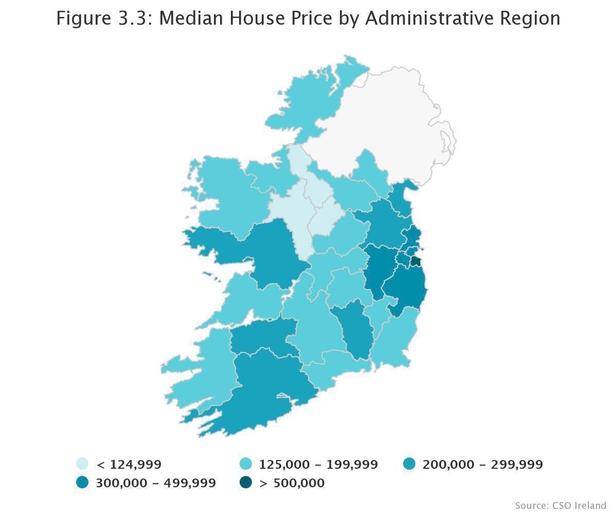 Today's figures show that households paid a median price of €265,000 for a home on the residential property market in the 12 months to May.

The CSO said the Dublin region had the highest median price of €392,500 in the year to May.

Within the Dublin region, Dún Laoghaire-Rathdown had the highest median price of €550,000, while South Dublin and Fingal had the lowest at €360,000.

A total of 3,207 home purchases were filed with Revenue in May.

The total value of transactions filed in May was €984m, the CSO said.

Dr O'Sullivan said that with the construction sector now also struggling with material and equipment as well as labour shortages - which are putting upward pressure on costs and hindering housing output - there is a growing sense that the only way is up when it comes to house prices.

"Today’s CSO data show that prices rose again in May, while our Housing Pulse sentiment tracker hit a three year high in June, with 81% of households thinking further price increases are on the cards over the next 12 months and two in five expecting them to go up by more than 5%," she added.