New figures from the Central Statistics Office show that in 2021 one in eight chief executive officers in Ireland are women.

The CSO's latest Gender Balance in Business Survey also reveals that in January of this year, 30% of senior executives in large enterprises in Ireland were women, a slight increase from the 28% reported in 2019.

Today's figure also show that men occupied 87% of CEO positions, down slightly from 89% in 2019. Meanwhile, women had 28% of chief financial officer positions while 72% were men.

The CSO also noted that female representation on boards increased from 20% in 2019 to 22% in 2021 and almost a third of appointed board members in 2020 were women.

Meanwhile, the level of female representation of board chairpersons increased from 7% in 2019 to 14% in 2021. 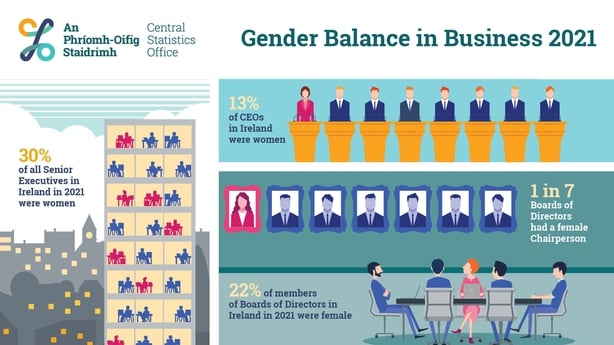 The CSO said its online survey was sent to nearly 700 businesses and the information was collected between the end of April and start of July. The response rate to the survey was 67%, it added.

President of Network Ireland Aisling O'Neill said the data was hugely encouraging for women, particularly considering the upheaval of the past 18 months and a series of reports showing women’s working lives have been heavily impacted by the pandemic.

"We know that visible role models are vitally important and I’d like to congratulate these women taking on chairperson roles in their companies for all they’re doing to advance their careers and thereby encourage others," she said.

"They are key to fulfilling the promise of the principle surrounding 'if we can see it we can be it’. "