Over 2.2 million contactless payments were made every day in May, new figures from Banking and Payments Federation Ireland show today.

BPFI said this marked the highest daily level since its contactless data series began in 2016.

May saw a total of 67.2 million contactless payment made over the course of the month worth over €1.078 billion.

Today's figures also show a jump of 73% in the monthly volumes of contactless payments year on year with the value of these payments rising by 82% to almost €1.1 billion during the same period.

The average payment value exceeded €16 for only the second time since the data series began at €16.04, BPFI noted.

"The increase we have seen in contactless spending during the course of May likely reflects the easing of Covid-related restrictions on many businesses, including retail and personal services, during this period," Brian Hayes, chief executive of BPFI said. 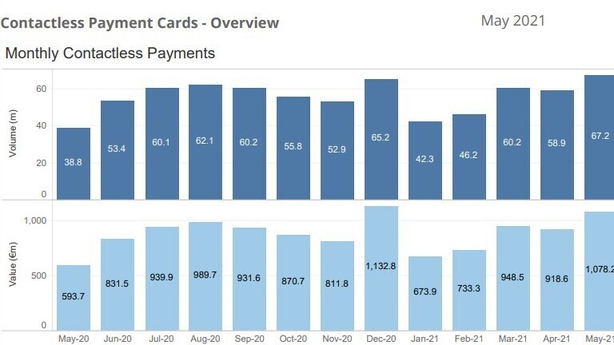 "This is supported by daily data from the Central Bank of Ireland which indicates that in-store card spending grew strongly in May," Mr Hayes added.